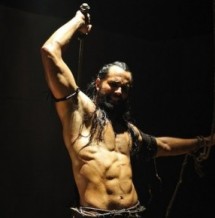 With a background in fighting, finance and film, actor Victor Webster’s story is multidimensional. With a black belt in tae kwan do and an undefeated record, as an amateur, in kick boxing, Mr. Webster’s athletic background left him well prepared for his role in the latest installment of the Mummy movie series.

Victor, whose had roles in TV series including Sex in the City, Baywatch, Bones and, recently, Castle can now be seen in The Scorpion King 3: Battle for Redemption – now out on DVD.

In this CYInterview you will learn of the fascinating journey that is Victor Webster’s life. You can listen to our conversation in its entirety or read the highlights below.

To land the role for The Scorpion King 3, which was filmed in Thailand, Mr. Webster had to do a mixed martial arts demonstration for the director:

“I had to do a martial arts demonstration for him and so that he could see that I could actually do everything that I said I could do. And it was key because if I would have had to go over there and learn how to fight, that would’ve been a very tough time…Already knowing how to do all the kicks and punches and having learned, you know what it takes, the toll that it takes on your body and being familiar with that as well. A lot of people think oh, I can learn how to fight, but what you don’t realize is when you’re doing these fight scenes all day long, your body really gets beat up. And so you gotta be mentally and physically prepared for that. I’ve been training in martial arts all my life. I’m ready for that. I’m use to that. I actually enjoy it.”

Better to have one real fight or act out fighting all day?

“It depends on which end of the fight you end up on. I think if you’re the loser in a fight, in a real fight, I think I’d probably rather do the fight scenes. But if you’re the winner, then yeah it’s good. But there’s nothing like being knocked unconscious as you saw recently at one of the mixed martial arts fights, a guy got his arm broken.”

Though he ended up in acting, Victor says he was prepared to take his career path into mixed martial arts as a trainer and a fighter. However, sometimes life has other plans:

“I actually started learning by watching Bruce Lee and Chuck Norris movies. I started teaching myself martial arts and then I started formally taking classes when I was nine-years-old and I still train three times a week now and spar three times a week and take classes. So, that’s probably the career path that I was headed on, was probably gonna open up a martial arts studio and maybe even fight professionally, but it never happened. Just life takes detours and I went in a different direction. Being in martial arts and training and the mental and physical aspects of that training played such an important role in my life that even if I wasn’t gonna do that for a living professionally, I still had to have that in my life in some form.”

Kimbo Slice – an MMA fighter who was the subject of much hype a few years back – and professional wrestler Dave Bautista of the WWE are in this film along with Webster. Victor gives his thoughts on being around these tough guys:

“I get along really well these kind of guys ‘cause I understand what they go through. I train with a bunch of professional fighters. I did it myself for a long time, the mentality, the discipline, the sacrifice that it takes, so to be around these guys and share a common bond and camaraderie and hear their stories and have some stories of my own and you know, I’m really impressed by first of all by professional fighters, what they go through all the time. And WWE wrestlers, these guys that are 250, 275 pounds and flips off the top rope and landing on some guy in the middle of the ring at a sold out stadium, that emotional pressure, that physical strength, have a lot of respect for those guys.”

Victor Webster explains how he went from the worlds of finance and fighting to pursuing his acting dream:

“Out of high school I modeled for a while and I kind of traveled around and I mostly modeled because I wanted to travel and get paid to travel. So I quit the import/export, I quit the stockbroker business and I didn’t know what I wanted to do. And I know that I wanted to travel, I know I wanted to see some things. So I went back into the modeling world a little bit. I lived in Spain. I lived in Italy, I traveled around; it was an incredible experience. And then I came back and I’m like, ‘No. I have respect for these people that do this for a living, but it doesn’t fulfill me. It’s not something that I feel like I’ve done something at the end of the day.’

So I started taking some acting classes to make some money in the interim until I figured out what kind of business I wanted to start again or what I wanted to venture into if I wanted to go back into being a stockbroker or what. And in doing so, I took these classes, kind of opened up something inside. You know, it’s like, I really enjoyed doing this. I wonder if there’s a way I could actually make a living at doing this. So I started going on auditions, I started booking jobs and everything just snowballs from there.”

With uncertainty in the financial markets, both in America and around the world, the former stockbroker lends his perspective on things:

“My biggest thing was the public opinion is kind of what runs stocks I would say. I’d be working with a particular stock and the CEO would get caught cheating on his wife and the stock would go down because the news of that would happen. And I just didn’t feel comfortable in a situation with something that’s as volatile and as touchy as that. In our world as small as that could effect the stocks. With these big things, these huge events that happen, have these massive ripple effects and it was just so unpredictable for me and to be able to take other people’s money that they would be saving for their kid’s college education or whatever it may be and invest something that I really didn’t have any idea what was gonna go on.

I just, you know, didn’t morally feel right about that. So I don’t like to invest my money in the stock market now either because of that volatility and I don’t know what’s going on and I can’t stay on top of it all day long. You know, that’s one of those things where there’s people who do well in stock market are very vigilant and they pay attention to world affairs and they’re watch the news and they’re watching the stocks all the time. I don’t have time to do that anymore.”

Victor says he hopes to get more involved in charitable works after his experiences filming Scorpion King 3 in Thailand:

“Trying to get involved more in the charity end of things. Having traveled over their in Thailand and then I went to Cambodia afterwards with a bunch of things that I learned about over there and that I want to get a lot more involved in personally, something different and not just my own life with the acting stuff. But I want to give some stuff back and try to help out in other ways.”

You can purchase a copy of The Scorpion King 3: Battle for Redemption here