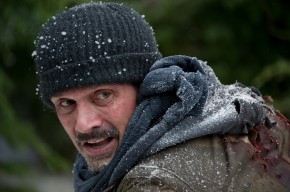 Coming off a role in thee 2011, critically acclaimed movie Warrior, about MMA fighters, actor Frank Grillo now looks ahead to one of the biggest challenges of his career. In The Grey – out in theaters nationwide Friday – Grillo plays a sociopath while working alongside actor Liam Neeson. 2012 is shaping up to be a big year for the journeyman actor.

Below you can read the highlights of our conversation or listen to the entire CYInterview:

To prepare for the role of a sociopath in The Grey, Frank ended up visiting Riker’s Island. It’s a jail in New York City that houses, among other inmates, prisoners who are mentally ill and have special needs. Mr. Grillo shares what he learned:

“It was brutal and scary and I got to talk to these guys a bit and interview them and get some insight on you know, people who live, I guess nonconventional lives. You just kind of feel bad for them too. They all belong there, but you kind of feel bad for them at the end of the day because if there situations were different when they were younger they wouldn’t be there. But yeah, it really gave me a good jump off point for this character in the film…

There’s also a side of them that is, a lot of them that are compassionate and you know they have families, some of them have children and you know there’s a sense of empathy I have for them because I think just maybe because of their socioeconomic background they ended up in the wrong place, but again, they’ve all done pretty bad things so there is reasons there is prisons like this.”

The Grey was filmed on a mountain slope. The cast and crew had to contend with ice and less than zero degree temparturues. The movie is a story of an Alaskan oil drilling team who survives a plane crash and ends up in a fight for their lives. Mr. Grillo reflects back on his experience in this survival based movie.

“They told us it was gonna be cold, but you don’t know what negative 25 is until you’re standing in it for like six hours. At the beginning it’s a little frightening because it is that severe and then you realize, ‘Wow, if I just kind of go with this, you know my performance is gonna be that much better.’ Because I didn’t have to manufacture any feelings or emotions about being cold or afraid, It was all very real…It was really a blessing that we weren’t in some back lot in Pinewood Studios with you know, mashed potato snow falling on our heads…

I was out in nature for six weeks with these conditions. It just kind of opened my eyes up about how fragile we are and at any given moment if they would’ve left us on the mountain we would’ve died. And you know, just goes to show you any time mother nature wants to wipe human beings off the face of the earth, it wouldn’t be too difficult…It was an experience that I think kind of changed me, certainly I’ll never forget it.”

With movies slated this year along with the likes of Sean Penn, Bruce Willis, Ryan Gosling and Jake Gyllenhal, among others, this could be Frank Grillo’s breakout year. He gives his thoughts on being a journeyman actor and what he’s learned along the way.

“I’ve never been a star and I’ve always been a guy who’s, I think people could rely on because I do the work and I pretty much keep my mouth shut. So you know it’s been interesting because I’ve been around guys like Liam Neeson who are the most humble human beings I’ve ever met and then I’ve been around other guys, other actors and movie stars who are not so humble and are kind of lazy and I took it all in and I watched the ones that are successful that I wanted to emulate and it’s funny because now I’m getting to work with a lot of them, it’s just been an interesting, you know I’ve come full circle.”

Finally, on his IMDB message board, there were discussions that Frank Grillo couldn’t be 48 years old. He said it’s true that he’s 48. I told him I thought he looked at least 10 years younger if not more. So what’s his secret?

“My secret is I’ve always been, I wrestled when I was very young and I’ve always wrestled and had an odd relationship with food. I think my secret is I don’t eat very much and I try to stay positive and happy. I’ve got three young boys that really keep me on my toes and I just refuse to age.”

The Grey is out in theaters nationwide January 27th. Visit the official site of the movie for more information at www.thegreythemovie.com.

One Reply to “Frank Grillo: In The Grey, Out This Weekend – Is 2012 the Year this Journeyman Actor Conquers Hollywood? In Films Opposite Liam Neeson (The Grey), Sean Penn, Bruce Willis, Ryan Gosling and Jake Gyllenhal; Reveals Secrets to Staying Young”