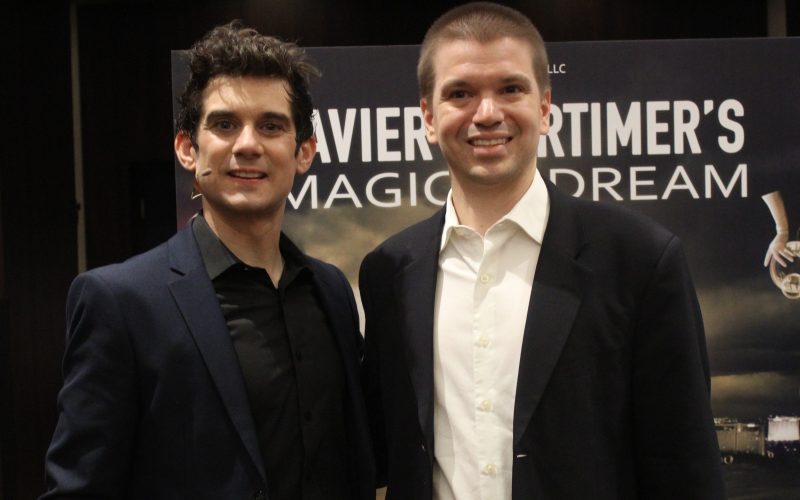 Last weekend, CYInterview was on hand for magician/illusionist Xavier Mortimer’s show at The Magic Attic at Bally’s Hotel and Casino. You can read our review of his show, Xavier Mortimer’s Magical Dream, by clicking here.

For three years, the former Cirque du Soleil performer has had his own show on the Las Vegas Strip. Xavier was part of the Cirque show, Michael Jackson One, at Mandalay Bay Resort and Casino before becoming a Las Vegas headliner.

The entertainer from France sums up what it has been like to have a show on the Las Vegas Strip, in our CYInterview with him earlier this week saying:

“It was probably, not now anymore, but the two first years I would say it probably that the toughest years that I had in my life. … Because I started something totally new. Because, I, it takes a lot to perform on the Strip. There’s so much pressure. There’s so much competition. It’s also a different country for me. I’m originally from France and I had to adapt my whole act, my whole show, my jokes, the way I do things, the rhythm, the pace of my show, everything. And it’s different than what I’m use to.”

Reflecting on whether he thought he could have his own show in the Entertainment Capital of the World, the magician admits he had his doubts. Three years later, his show can be seen weekly at Bally’s Hotel and Casino:

“It’s fantastic to see that everything’s possible. I couldn’t imagine that it would work.”

You can learn more about Xavier Mortimer’s career as a magician/ illusionist and his Las Vegas show by listening to the entire CYInterview below:

You can check out his official website clicking here.