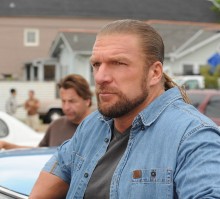 In the fall of 2004, one of pro wrestling’s biggest and most controversial stars, Hunter Hearst Helmsley aka Triple H, joined me for an interview. Seven years later, the multi-time WWE Champion is back. With many fans and critics alike, there might be no other professional wrestler who has received more scrutiny during the last decade. With his retirement from full-time pro wrestling, Paul Levesque – Triple H’s real name – is heading to the movie screen this weekend in Inside Out. It is not his first time in the movies. You can listen to the entire interview below.

The larger than life star said he had not planned to get back into movies. He tells us, it just happened. After his role in Blade Trinity, he said New Line offered him a three role movie deal that he turned down:

“Acting really was never for me the end goal. You know? I enjoyed being in WWE. I wanted to be a wrestler. That’s what I got in it for and that’s what I loved…It’s not something where even now like these two movies come out I’m saying like, you know, where’s my next project? Guys, what’s my next film? I have nothing. If the next thing comes up, great. If it doesn’t, that’s great too. I’m happy where I am.”

Pro wrestling being full of over-the-top hype, I thought Paul did well not overacting in Inside Out. The former WWE Champion agreed that not overacting is the biggest challenge any pro wrestler faces when working in the movies.

“I think that’s biggest challenge for any of our guys when we get in the movies is – what we do is theater. In theater you’re playing to a much larger environment. You’re playing to the masses that are in front of you at that moment…You really have tone everything so far down because just the littlest, slightest nuance in your face creates an emotion that if you try to do that emotion, you’re gonna way overdue it. I think you need, that’s the biggest challenge I think for all of us, making that transition from the WWE to a film is to try not to overact…I’d love to do something with [Arnold] Schwarzenegger, something just ‘cause I was such a huge fan of his growing up, all his action films.”

For many wrestling fans, the end of the 1990s to mid 2000s represented a high for professional wrestling. There were huge audiences, at one point reaching a television viewership of seven million people a week for WWE Raw. Today, ratings are half or less of what they were.

Discussion of wrestling’s fall in the ratings continues, as Monday Night Football gets ready for regular season action. Football viewership on Monday nights will affect WWE Raw’s numbers, which comes up during the same time slot.

Triple H reflects back on the WWE Attitude Era, which ran from the end of the 90s for about six years. He believes wrestling could draw those audiences again:

“We’re doing every major arena in the U.S. It’s selling out without even thinking about it. Were doing sevens [7.0] on TV. I know there were segments, I remember segments doing like an 8.4 for an individual segment. I mean, just ungodly ratings. Do I think it can ever get that big again? History can repeat. I say without a doubt. I think it can be even bigger…What tomorrow brings, no one knows.”

Over the years, Triple H has been the object of many negative comments, from wrestling fans and critics who believe he has received preferential treatment and greater opportunities on WWE TV, because he is married to Vince McMahon’s daughter, Stephanie. McMahon is the boss of the WWE.

There have been claims that he held wrestlers down, keeping them from achieving more success in the WWE and receiving more opportunities to shine on the company’s television programs.

I mentioned to Mr. Levesque that because he is now working, behind the scenes, in creative and on talent development, this might be his chance to prove he has no problem helping other talents succeed and get over (wrestling jargon for gaining greater acceptation.) Paul responded by saying he has no desire to prove anything to anyone and calls out his critics:

“I don’t have the desire. I don’t feel the need to show that. I know what I accomplished in this business. I know why I accomplished it. I don’t. Critics and what people say about this or that or my marriage [to Stephanie McMahon] or any of that stuff is crap. It’s mostly started by people that are either jealous or angry that they failed where other people succeeded. I mean, that’s a common, I was told it when I started in the business.

It’s a common saying in this business, you can make friends or you can make money. You can have buddies or you can get over. Which one do you want? You know, and they don’t come together. And I think, I don’t, I never look at it that way. I don’t have anything to prove to anybody. I’ll put my body of work up against anybody in the business. I’ll put my drawing power up against anybody in the business. That’s irrelevant. It’s people’s opinions”

Looking back, over a decade ago, there were mega wrestling stars with their own unique personalities including Steve Austin, The Rock and Mick Foley. Today’s wrestling landscape does not afford young wrestlers the opportunity to work in the old territorial wrestling system. That was where wrestlers could work in front of crowds in different regions across the United States and create their own characters. This served as a learning process.

Currently in an executive role as a senior advisor focusing on wrestling talent development, Triple H admits many new wrestlers do not have enough of a wrestling education when they join the WWE:

“We’re a victim of our own success. There’s no place for guys to go and figure out how to do this. We have to teach them kind of and get them up to speed to speak. Even when you get guys off the independent scene, they are very much independent wrestlers and then the independent scene will, so these guys are the greatest guys in the world and you bring them up and they flounder on the big stage. They can’t. They can’t. It’s a completely different animal and a completely different world and you have to, it’s relearning and re-teaching. That’s the biggest, I think, struggle we have is getting these guys there.

But listen, at the end of the day, you just have to find guys with the right charisma and they have to be the ones to put that charisma out there. Nobody told The Rock how to be The Rock…Work rate is important, guy’s skill in the ring is important, but at the end of the day it’s about charisma. It’s the ability to draw fans to arenas and the guy that draws the most fans to the arena for whatever reason, positive or negative, he’s the top guy.”

Triple H’s mentor and trainer was the late, great wrestling legend Walter “Killer” Kowalski. Kowalski died in 2008. At a recent auction for many of Walter’s vintage wrestling items, Triple H says he won 99 percent of the items. He wants the world to see “Killer” Kowalski’s possessions and understand what he meant to the business. Additionally, Paul tells me a WWE Hall of Fame, showing many great wrestling items from the history of the business, will happen one way or another.

“I think I was gone on the road for SummerSlam, but I had somebody at the office bid online and I got I think like 99 percent of everything wrestling-wise, which I’m glad I did. I just didn’t want that to go to somebody that just hid it away somewhere. I wanted the world to be able to see how great he really was. And do I think they’ll ever be a hall of fame? Yes.

I think they’ll be a physical hall of fame. That’s something we’re working on. It’s definitely in the works. It’s just a matter of when, where. Is it a traveling hall of fame? Is it a permanent place? There’s a lot of questions and thoughts on it and we’re in the process of collecting things to put in there. But the Kowalski stuff for me was as much a legend in this business was also a very personal thing for me.”

He says his father-in-law, WWE CEO and Chairman Vince McMahon will be involved with WWE till he dies.

“Vince will outlive all of us and will be doing this until he dies. He will not stop. He will not quit. He’s relentless. He will be like a cockroach. The atomic bomb will go off, we will all perish, but Vince will still be here working.”

“I think so. It’s funny that when you can watch CNN report on some kind of political event and it’s almost, we’re almost tame in comparison.”

Triple H notes his favorite wrestling moment was when he returned from a major leg injury, to his quadriceps, and got in the ring at Madison Square Garden on WWE Raw in 2002. He shares with us his hopes for the future and what he wants people to take away from his wrestling career:

Photo for this piece is credited to WWE Studios.

Inside Out is in movie theaters across the country this weekend. Check out www.insideoutmovie.com for more information.

11 Replies to “WWE Superstar Triple H Speaks With CYInterview, On: His Role in the Movie, Inside Out; WWE’s Creative Challenges; What He Thinks of What His Critics Say; And How Politics are Similar to Professional Wrestling; More”