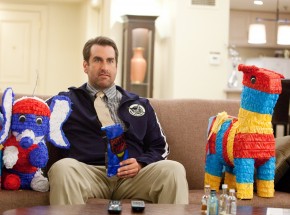 For anyone who thinks a person cannot serve in the military and have a career in show business at the same time, they need to think again. Comedic actor Rob Riggle has worked with many of the biggest stars from Oscar winner Tom Hanks to this year’s Oscar nominee Jonah Hill. Some will recall Mr. Riggle’s work on Comedy Central’s The Daily Show, Saturday Night Live, The Hangover or his voiceover work in the recently released Dr. Seuss movie The Lorax.

Aside from his acting work, Rob Riggle has served for 22 years in the Marines, originally enlisting at the age of 19. For nine of those years he was on active duty. For 13 years he has been in the reserves. Rob is a fascinating individual, who believes a person can wear more than one hat in life. You can read the highlights of our conversation or listen to the entire CYInterview below:

Rob Riggle’s latest project is in the movie 21 Jump Street, out Friday in theaters nationwide. The movie stars Jonah Hill and Channing Tatum. It is about two people who could not stand each other in high school but later become friends during their time together in the police academy. Mr. Riggle tells us about his role:

“I play a character Mr. Walters. I’m the gym teacher/track coach and you know for this role I just kind of went back and pulled from my experiences, some of my coaches in my past and different people I’ve met through my life’s journey and the alpha male type kind of guys and I just plucked from them and tried to make, put ‘em into the character of Mr. Walters…I actually credit some of my high school coaches, not just my teachers, but some of my high school coaches for setting a great example and really putting me on a good path…It’s a really fun, action comedy that people are gonna enjoy.”

As for his 20 plus years as a Marine, on both active duty and in the reserves, Rob shares how that part of his life has impacted him:

“I am in the Marine Corp and I served in Liberia. I’ve served in Kosovo. I’ve served in Afghanistan. I was at Ground Zero moving rubble by hand. Those have big, big impacts on your life. They make a difference. They are things that you take with you and you draw from when you’re an actor, all those emotions to go along with that you remember those.”

In a world where many of us are taught to focus on one goal or profession, Rob Riggle shows that you can pursue diverse interests. Many will say that the military and acting are incompatible worlds. However, it’s obvious the comedic actor has not limited himself:

“I’ve always had a passion for it [acting]. I have a passion for comedy. But that doesn’t deter me from doing other things. So I also had my pilot’s license when I was in college. So when you graduate as a theater and film major from college you’re gonna be a waiter or a bartender. I also could’ve been a pilot. So that’s what I did. I pursued flying for a while and then realized I needed to go follow my heart and try comedy and acting…I think that you can wear more than one hat in this lifetime. When I’m a Marine I put on my Marine hat and I conduct myself accordingly. But I love comedy and I’m a comedian. And so when it’s time to play, I play and I have a lot of fun doing it. And I’m just lucky that I live in a time and place where I can pursue my dreams so that’s a good thing.”

“It was awesome to do a scene with Tom Hanks, it’s surreal. You wanna pinch yourself and you wanna stand up and call all your friends and say, ‘I’m doing a scene right now with Tom Hanks just so you know.’ So it was hard for me. I had to calm down and focus and really just you know focus on doing, trying to do the character as best I could ‘cause it is an awesome experience…I learned patience and control and that’s a good thing to have when you’re an actor.”

Rob speaks of his hopes for the future as he continues to build his acting resume with noteworthy roles:

21 Jump Street opens in theaters nationwide this weekend. You can find more information about the movie here.