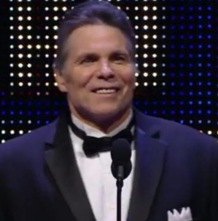 Known as The Genius, the Poet Laureate of Professional Wrestling and “Leaping” Lanny, Lanny Poffo is one of the greatest professional wrestling personalities of the last 50 years. His ability to recite different poems during wrestling promos proved him an original talent. Lanny hails from one of the greatest families in pro wrestling history. His brother is the late, great “Macho Man” Randy Savage [see segment with him from 2003 here] and his late father Angelo Poffo was a territorial wrestling legend and promoter.

Today, Lanny is taking care of his mother, while continuing to give motivational speeches. He also appears on the pro wrestling independent circuit. Through tragedy, Lanny has found himself as the person in his family who now has to make what he calls unpopular decisions. With the passing of his brother “Macho Man” Randy Savage in 2011, Lanny decided that he should be inducted into the WWE Hall of Fame by himself. This was against his brother’s wishes, who wanted the entire family to be inducted together. In 2015, Lanny appeared before a crowd of WWE fans, wrestlers and others to induct his brother into that year’s WWE Hall of Fame class.

As far as his own life is concerned, Lanny Poffo tells us about his health conscious diet and clean living, actions steps he is taking in his quest to live as long as possible. The man who loves poetry even wrote a book titled Limericks From The Heart (and Lungs!) in order to educate kids about the harms of smoking. When it comes to professional wrestling, Lanny Poffo will never be duplicated. He is truly The Genius!

Featured columnist Jay Bildstein joins us for this segment. You can read the highlights and listen to this entire CYInterview below:

One of the signature characteristics of Lanny Poffo’s personality in the WWE was how poetry was part of his gimmick. It all began on an episode of Tuesday Night Titans:

“When we went to black, which as you know is when you go to commercial, Vince McMahon said, ‘Lanny, that was great. From now on, you do a poem before every match.’ And I pretended to be cool about it. I just said ok. But inside I was going, ‘YES!’ And I had a gimmick. So that was it. And then when I became a villain, The Genius, oh man, that was easy. I just went to every city and insulted their sports teams. That was easy. Yeah. ‘Cause there’s no heat like cheap heat.”

Focusing on what he is up to today, he told us this:

“I’m just taking care of my mother. You know, after my father died and my brother died right after, she hit the skids pretty badly. So I sold my house. I moved in with her and she’s gonna be 90 years old January 28th. She’s doing much better. I told her, ‘Do you want to live? Or do you want to die?’ She says, ‘I want to live.’ I said, ‘Then you have to notify your face.’ And I haven’t seen her smile in years. ‘You know, you’re gonna have to smile and laugh.’ And she says, ‘But what after I lost?’ I said, ‘Fake it till you make it.”

Recently, a legend in the industry, pro wrestler/manager Mr. Fuji passed away. Lanny Poffo says that when his parents visited Hawaii, Mr. Fuji had friends of his give them a five star tour:

“He [Mr. Fuji] had lived in Hawaii for a lot of years, he had a lot of friends and he gave my parents the blue chip tour.”

“Now my mother was very upset because she knew that Randy’s wishes, she says ‘You can’t do that. This is Randy’s wishes.’ And I said, ‘I am the older brother now. I get to make unpopular decisions. It’s my wishes that are gonna happen. And Macho Man is going in the Hall of Fame because the fans have been suffering enough. On one hand you’ve got one Macho Man, on the other hand you’ve got millions and millions of Macho fans. And if it wasn’t for the Macho fan, the Macho man would not exist. So in a way, I am doing Randy’s biding.’”

You can check out Lanny Poffo’s official website here.