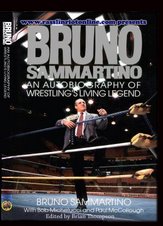 In a wide-ranging 55 minute interview with Chris Yandek of CYInterview.com and columnist Jay Bildstein, wrestling legend Bruno Sammartino spoke candidly about numerous subjects. The former world heavyweight champion discussed the re-release of his biography Bruno Sammartino: An Autobiography of Wrestling’s Living Legend, the appearances he still makes today, an in-depth look at his tremendous strength and powerlifting background, and his thoughts on where Vince McMahon has taken professional wrestling The following interview was originally posted at DiaDay.

Listen to the entire Bruno Sammartino CYInterview below:

A few highlights from the CYInterview:

Bruno is not convinced Mickey Rourke’s physique for the movie The Wrestler is natural. “Without a doubt in mind there is no way in the world anybody can make me believe that. That is pure 100 percent nonsense. There is only one way and one way only at that age that he could’ve gained that kind of muscle and you know what it is.”

Bruno went on to discuss the human body noting what experts have concluded, “When you train, you reach your peak at a certain age and they say as we get older, like the time you hit 40, by the time you hit 40 to 50, you more or less can come close to maintaining what you have. But there is a slow deterioration no matter how much you train. It goes slower but it continues.”

At 73- years-old, he adds what is ahead for his life, “My wife and I are celebrating our 50th anniversary so we’re going to go back to the old country. Other than that, believe me my life, I am at peace, I am happy, and my wife – I kid around and say we’re dating again because every Saturday we go out on a date. I have my grandchildren and my sons here. I love getting up in the morning and doing my thing first, my workouts whether it be the aerobic or weights and then the rest of the day whatever it brings is fine. Other times I like to read or if there is a special on. But it’s a very simple life and one that I enjoy after all those years of traveling around the world.”