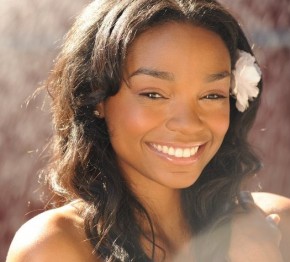 As regular visitors to CYInterview know, we bring you interviews with newsmakers, movers, shakers, stars, celebrities, intellectuals, power brokers, the beautiful people and sometimes individuals who are relatively unknown. Those who are unknown have often flickered in front of our attention span just long enough to cause us to think, “Hmmm, who is that?” Then we get back to our lives and they slip from our consciousness.

A good example of someone who caught our imagination, based on a quick appearance, was actress Michelle Lemon. She played opposite Will Smith in the movie Hancock. You can read/listen to her CYInterview [see here].

Today, we bring you someone who might have provoked the same kind of “Who’s that?” reaction. By now, many of you have probably seen the new McDonald’s commercial in which a beautiful assistant in her 20s goes off in search of breakfast for her boss. The assistant brings back a selection of McDonald’s breakfast choices. She ends the commercial by saying to her coworkers “She’s in a really good mood.”

If you haven’t seen the commercial, you can see it here on YouTube. Actress Shavon Kirksey is the young woman who gets the tasty treats for her boss’s breakfast. You can listen to her entire CYInterview below or read the excerpts.

Listen to the entire interview with Shavon Kirksey:

Shavon tells me what getting the role in the commercial has meant to her:

“I am so thankful. Like, it’s just been such a great opportunity for me and like, I’ve been getting so much exposure and it just, it came at the right time because you know, I was on hold for so many different projects and then you know sometimes you just don’t get those or they go a different way, just like things you can’t control. And so finally when this McDonald’s commercial came around, I was like, oh, I like this character. It seems really fun and it’s a lot of dialogue for a commercial. So I was just really excited to even have an audition for it and then when I ended up booking it, I was just so happy because like I said, I was on hold for like six different ones and then finally like McDonald’s came through and I was like ‘Yay! It’s a winner.’ And they’ve been airing it like crazy so I’m very grateful.”

Shavon admits she has been recognized in her daily life for being the woman in the McDonald’s commercial:

“It’s been kind of crazy. Like I was at California Pizza Kitchen just having dinner with one of my friends and there’s a group of teenage girls that came over to me and they were just like, ‘Oh, you’re the girl in the McDonald’s commercial.’ And I was like ‘Yeah.’ And they’re like, ‘Oh, you’re so cute. I always see it. You did a really great job.’ And I’m just like, ‘Aww, thanks.’ Like it’s really nice to have people say really encouraging things and like just that my work is appreciated, what I did in the commercial.”

Ms. Kirksey says she has been getting calls for other auditions from casting directors who saw the commercial. Though this McDonalds’s commercial might lead to bigger roles for her, the twenty-something actress has had a few recurring and guest star roles on Grey’s Anatomy, Private Practice and Lincoln Heights, already.

“I have been getting a lot of calls for auditions and just casting directors saying, ‘Oh, I’ve seen your commercial, you did a really good job. ‘ So I’m glad that it’s getting the exposure and I’ve just been testing for different shows and I’ve been on a hold a couple times so I’m just waiting for that next opportunity to come through…I’m just so thank for those [roles in various TV shows] because it really like prepares you to be like a series regular ‘cause most of those I was either a guest star or recurring and so it gives me that experience to know like how things run on set so when I do get that series and I’m a regular, then I’ll know how to like handle it.”

For all those wondering, Shavon’s favorite McDonald’s breakfast menu item is the Egg McMuffin. Food aside, this is what she wants people to know about her:

“I just want people to know that, like, I work very hard and, like, everything that I do get like, I’m just really grateful because I mean, this is a tough industry. It’s very competitive and I just know that when you work hard and you persevere and you keep going, even if you get told no 100 times, like there is that one yes and when there’s that yes, it’s just everything else is just so worth it to me like go through all of that.”

Side note: Eva Longoria said the same thing to me in our 2008 interview [see here]. This is what Ms. Longoria said, “I had 100 no’s in auditions to one yes. You have to be pretty resilient to go through that in Hollywood.” Ms. Kirksey has learned something an A-List TV actress figured out. Perhaps, this is a sign of great things to come for Shavon, as she continues to make her way through Hollywood. We’ll be keeping an eye out for her.

You can check out Shavon Kirksey’s IMDB profile here.

One Reply to “Who’s That Girl? Actress Shavon Kirksey is the Boss’s Assistant in the New McDonald’s Breakfast Menu Commercial”