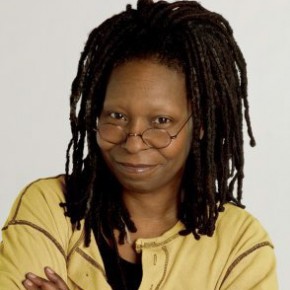 Whoopi Goldberg has won every award an actress can possibly accept. The Oscar winning Ghost actress has gotten comfy in the chair as the moderator for the ABC talk show The View, but it doesn’t mean we won’t see her on the big screen again if the right thing comes along. She denies there are any problems at The View behind the scenes and that the public shouldn’t believe everything they read. But speaking of literature, Ms. Goldberg hopes you read her new children’s book Sugar Plum Ballerinas to your children or that they read it themselves. It’s the story of a young girl who is forced into everything ballerina by her mother when she dreams of being something else.

Listen to the Whoopi Goldberg CYInterview:

Chris Yandek: The main character Alexandrea who is named after your daughter has a mom who pushes her into being a ballerina. Do you think mothers push their daughters into certain things because they’re trying to live out their dreams and maybe in some ways this mother daughter relationship is like the one that you have with your daughter?

Whoopi Goldberg: “No. (Laughs) My kid was always very clear of what she wanted to do. She did not want to be a ballerina. She wanted to draw. I think that was what she originally wanted to do, but I think often times when moms haven’t had the ability to live out their own dreams because they were shut down for whatever reason they tend to sort of try to do it through her kids. Poor Alexendrea Petrakova, she’s one of those kids whose getting it whose mom wanted to be a frilly all in pink, tutu wearing, toe stepping little girl. Alex is not that. She wants to be a speed skater. Her mother just totally can’t understand it.”

CY: You say that some of the characters in the book relate to people you know in your life, but why a ballerina? Why a story about a ballerina?

WG: “Because when I was a little girl that’s one of the things that lots of little girls aspired to. If you were lucky enough to get a little jewelry box it always had a little pink ballerina on the top. If you got some of the little jewelry that was around when we were kids it was all pink and all about ballerinas and all of that and then those girls grew up and they never got to be ballerinas. They never even got to try because we were told there was a bone missing in our legs so we were told we couldn’t go up on point.”

CY: Whoopi I have to say, we’re going through one of the toughest times right now in this country economically and so many other ways, but knowing that the President can only do so much, are you concerned that if Barack Obama gets elected many people are expecting him to do more than he can possibly deliver and with that being said maybe worry about a possible backlash for the people who supported him?

WG: “Well, it doesn’t matter who gets in. Whoever gets in is getting into a mess because we don’t know what the last eight years really were about. We won’t know and neither who gets elected until they’re in the middle of it. So nobody. It’s gonna be a rough job on whoever it is. It’s not Barack and it’s not John McCain. Doesn’t matter. None of them are going to be able to do a lot of what they want to do because they don’t know how bad the shape we’re in is. That’s the first thing. And taxes are gonna go up. It’s the way it is. We have two wars and God knows what else to pay for. This idea that we’re gonna be able to cut it is not correct.”

CY: Do you think certain people are looking for a savior right now?

CY: We’ve seen a lot of narration work from you in recent years when it comes to movies, but would you do anything on screen if the right offer came about or is acting over?

CY: There has been a lot of talk around The View, offset feuds. Girlfriends, women they all get in fights all the time, but at least is it fair to say maybe some of the stuff is obviously a little taken out of context, but you say there are some disagreements offset among the ladies?

WG: “No. I wouldn’t say that because that wouldn’t be true.”

WG: “Listen, let me tell you something, they did this show for ten years and no one said boo. They had one year of a lot of controversy and now everybody is looking for it. Ten years they had no issues cause the women all understand that if you disagree with someone it doesn’t have anything to do with them personally. It’s their idea that you’re disagreeing with. So you can actually still remain friends with people you don’t ideologically see eye to eye with and I find it shocking that people think this is such a surprise. Do they think women are so dumb that they don’t know how to be friends cause they disagree? Only guys can’t be friends when they disagree.”

CY: So once you get off that set it’s over?

WG: “Once you get off that set it’s not that it’s over you know. We have the hot topics in the beginning of the show and we disagree or we agree and then we go on to the next thing. It is ridiculous that people think we sit around fuming. Who has that kind of time? Elisabeth’s got two kids. Sherri has a kid. Joy’s got work she is doing and I don’t have time to sit around being pissy with somebody else.”

You can find more information about Sugar Plum Ballerinas below:

2 Replies to “Whoopi Goldberg: What A View”