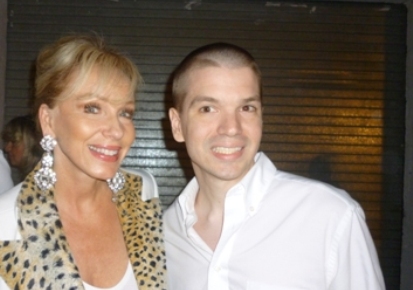 Across Miami, thousands showed their support for White Party Week. The week’s worth of festivities is touted as the biggest HIV/AIDS fundraiser of its kind. Models dressed in white kicked off the annual White Party, at its new home at SOHO Studios. Miami’s most famous drag queen, Elaine Lancaster, [see CYInterview here] was on hand to get things going.

In attendance at the fashion show was one of Miami’s most well-known socialites/charitable doers, Lea Black of The Real Housewives of Miami. Ms. Black was there supporting longtime friend Elaine Lancaster. Lea is a charming and down to earth person who we are looking forward to CYInterviewing in the not too distant future. Some will recall our past CYInterviews with Lea’s husband, attorney Roy Black [see here]. You can see our photo with Lea above.

Below you can see some photos from the fashion show:

White Party Reset was a night to remember with nonstop music, entertainment and socializing for a worthy cause.

You can find more information about White Party Week 2012 here.