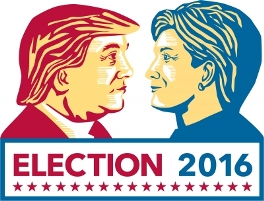 America is facing significant challenges. The nation is saddled with enormous debt. The recovery from the 2008 financial crisis has been slow. The political system in Washington has been almost completely taken over by self-interest and a lack of comprise. Blind partisanship has replaced the principle of putting country first. In many cases, holding office has turned into a ticket to increase personal wealth and fame, not serve the people and the public interest.

This is not to say that we do not have many good people working as elected officials. We do. However, throw even the best people into a system that has been thoroughly contaminated by the institutionalization of self-interest and the nation’s prospects dim. Indeed, we are approaching a blackout.

Ladies and gentlemen, these are tough times. But Donald J. Trump is not the answer.

What we put forward here is the case against Mr. Trump’s candidacy based, not on hearsay or claims of what he may or may not have done prior to the election season, but based on his own words, spoken during the campaign.

Mr. Trump’s campaign has debased the national dialogue, coarsened an already fraught political process and, perhaps most alarmingly, drawn good people away from their own values in the hopes that one man, as if by magic, can right everything that is wrong with our system. This is how dictators come to power. And this is how even the most advanced societies, societies that value justice and civil liberties, fall to the dark side of human nature.

The potential for dictatorial evil has been knocking at the door. We must not open it.

Please examine the following list of Donald Trump’s statements during the campaign. Ask yourself whether what he says reflects your values. Ask yourself if these are American values. Only you, through the voting process, can prevent the calamity that a Trump presidency would be.

Killing the families of terrorists, people who have not participated in terrorism, is a violation of the Geneva Convention to which the United States of America is a signatory. It is a war crime. Do you support the commission of war crimes? We didn’t think so.

2. Mr. Trump had this to say about waterboarding, a torture practice that has been outlawed by the United States, “Would I approve waterboarding? You bet your ass I would — in a heartbeat,” and “It works,” “Believe me, it works. And you know what? If it doesn’t work, they deserve it anyway, for what they’re doing. It works.”

Torture is a violation of the Geneva Convention. Torture is a war crime. Do you agree with torture? We didn’t think so.

3. In his campaign announcement speech, Mr. Trump had this to say, “When Mexico sends its people, they’re not sending the best … They’re sending people that have lots of problems …. They’re bringing drugs. They’re bringing crime. They’re rapists and some I assume are good people.”

This is called scapegoating.

The vast majority of people coming from Mexico are good, hard working folks who simply seek a better life. The United States is a nation of immigrants. The immigrant experience is a point of national pride. It is part of our collective spirit. Bad mouthing people owing to their national origin and blaming them for the challenges we face is scapegoating. Do you like being blamed for something that is not your fault? Would you like to be made a scapegoat? We didn’t think so.

4. Back in December 2015, Mr. Trump had this to say about Muslims, “Donald J. Trump is calling for a total and complete shutdown of Muslims entering the United States.”

The United States was founded, in part, by individuals seeking religious freedom. The idea of some kind of religion requirement for entering the United States goes directly against who we are as a nation.

Mr. Trump could have called for vetting people of all religions, coming from a specific country or region, based on national security concerns. Reasonable people could debate whether or not that makes sense. However, singling out all people of a given religion and banning them from coming to the United States is completely un-American.

Would you want to be banned entry to a country because of your religion? We didn’t think so.

5. Here is what Mr. Trump had to say about Senator John McCain, back in July of 2015, “He’s not a war hero. He’s a war hero because he was captured. I like people who weren’t captured.”

John McCain is a war hero if there ever was one. He was shot down over North Vietnam and held as a prisoner of war for five and a half years. He was tortured and brutalized over that period of time. McCain was offered early release, owing to the fact that his father was an admiral and the North Vietnamese wanted to create positive propaganda for themselves.

John McCain refused early release because the prisoners captured before him were not going to be released as well. Again, Senator McCain is a true American hero. Mr. Trump, on the other hand, has never served in the United States military.

If you are or were a member of the American military, would you want to be regarded in this way? We didn’t think so.

We could continue, but the five points above should be enough to prove to anyone that Mr. Trump has, through his own statements, disqualified himself from being President of the United States. Our points are not based on guesswork, rumor or innuendo. These are things candidate Trump has said. We take him at his word. So should you.

The United States is like a person suffering with a disease. The nation has many challenges facing it. And we understand that many good people are frustrated with the system and hoping against hope that someone who has not served in elected office can change things. However, like a person with an illness, the United States of America must be healed by the right treatment. Donald J. Trump is not that treatment. We believe in our hearts that you know this.

Mr. Trump has called for committing war crimes and using torture. He has used scapegoating as one of his campaign techniques. He has disrespected one of our nation’s greatest living war heroes. Do you want a person like that for president? We didn’t think so.

Together, we can work to overcome the nation’s challenges. Together, we can make tomorrow a better day. Listen to your conscience. On Election Day, vote for Hillary Clinton.