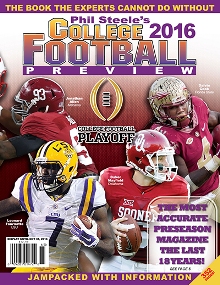 When it comes to non-conference games in week 1 of the college football season, this year’s set of games may be the best ever. With the college football playoff in its second year of existence, teams are now adding better opponents to their schedules. The four teams who play for the national title are selected by a committee who reviews every team’s resume. A win over a strong non conference opponent can be the difference for some team’s national title hopes.

Recently, we welcomed back Phil Steele who is that editor of a yearly college football preview magazine that has been around for more than 20 years [see here]. The NCAA Football expert gives his predictions for the eight biggest games of week 1.

You can read his analysis for each game and listen to the entire CYInterview below:

“Alabama always opens up strong under [Nick] Saban. So I like Alabama to win this one in the opener, but, you know, USC’s a very good opponent for the first week.”

On number 5 LSU vs. Wisconsin playing at historic Lambeau Field:

“Wisconsin’s defense will do fairly well, but I don’t know if anybody can really slow down Leonard Fournette this season. … I like LSU to win this one even though the game is in Wisconsin.”

On number 3 Oklahoma vs. number 15 Houston:

“The Sooners are a team that is loaded offensively and defensively, top 10 in the nation both offense and defense and on special teams. So all three areas I think talent wise they can get there. And I like Oklahoma to be able to go into Houston and come out of there with the win.”

On number 18 Georgia vs. number 22 North Carolina at the Georgia Dome:

“This one to me is sort of a toss up game. I’m gonna lean with Georgia to escape there with a win in a very close game.”

On number 2 Clemson vs. Auburn:

“I think if John Franklin had won the [quarterback] job and Auburn’s offense was humming along, I would say Auburn’s gonna take this one down to the wire. But with the fact that it’s gonna be Sean White, I gotta go with Clemson to win this one.”

“This game to me rates as a toss up. I think UCLA’s a little bit better team, A&M rates the home field edge. I went back and forth on it for a while; I’m gonna lean with UCLA to pull the upset though on the road. I’m gonna be really high on that UCLA defense this year”

On number 10 Notre Dame vs. Texas:

“I think Texas can do some damage. So this is one of those games that’s gonna be tight, down to the wire. I’m gonna call for another upset here Chris. I’m gonna go with Texas.”

“The game’s being played in Orlando. Florida State played their spring game there; probably have a little bit of a crowd edge. So even though that both teams are very talented, I’m gonna lean with Florida State to come away with the win there.”

You can purchase Phil Steele’s college football preview magazine and find all his daily information at his official website www.philsteele.com.