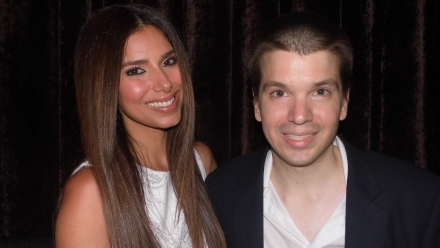 In 2001 actress Roselyn Sanchez made her presence known in the movie Rush Hour 2. Playing an FBI agent, alongside actors Jackie Chan and Chris Tucker, she portrayed a woman both alluring and tough.

Ms. Sanchez has gone on to successful roles in TV series Without a Trace, Kojak and, is currently on the hit show Devious Maids. The 41 year old actress, singer-songwriter, producer and writer recently appeared at the new South Beach hotspot Cavalli Miami, for a Venue Magazine party, where she was honored for being on the cover of the magazine.

Cavalli Miami is a restaurant and nightlife venue which opened earlier this year and is, as the name would suggest, a collaboration with famed designer Robert Cavalli. Ms. Sanchez is the Venue Magazine’s July/August cover girl.

We had a chance to speak with Roselyn during the party.

This is the second time that Roselyn has been on the cover of Venue Magazine. Speaking about the honor, the Puerto Rican beauty told us this:

“I am very blessed. You know, I think I am in a great time in my life. I’m a mother, I’m working like crazy, Devious Maids has been a blessing. … So I’m excited. I’m in Venue Magazine. It’s not the first time they give me the cover. They’ve always been very, very supportive. So I’m excited.”

You can currently find Roselyn on the Lifetime cable TV show Devious Maids. Past CYInterview guest Eva Longoria [see here] is an executive producer of the show. Speaking about her relationship with Eva and working with her on Devious Maids, she shared this:

“I love her. She’s a good friend of mine. She’s like a sister and just the fact that she’s my boss and she’s just incredible, such an important figure for the Latino community. You know, so supportive, so smart, we grew up together in this business and just to see her fly and become this incredible political figure, I am just very proud of her.”

You can find more information about Venue Magazine at their official website here.