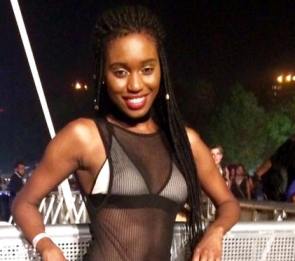 In September of 2012, we attended a swimsuit fashion show by designer Natalya Toporova [see here]. The invitation to that show came about in an interesting way. Sometime before the show took place, we had the opportunity to cover a performance by Grammy Award winner Mya, at the South Beach club Mokai [see here].

It was a great night. In fact, we had the opportunity to hang with Mya before and after her performance. Not only is she a great singer, she is a terrific person. That evening, Mya was wearing a particularly eye catching dress designed by Ms. Toporova. The design was so well done that we got in touch with her and that led to the invitation.

At the swimsuit fashion show, one of the models we met was Kiara Pace. Fast forward from 2012 to 2014, Kiara decided that she wanted to take her modeling career from Miami to New York. After saving enough money, selling her car and finding an apartment, she took off for the Big Apple.

Ms. Pace is currently residing in New York, has cultivated relationships in the fashion industry there, has local representation and is a working model. Additionally, she has had the chance to experience some of the great things New York has to offer. Above, is a photograph of Kiara at the recent Afropunk Fest in Brooklyn, at the end of August.

With New York Fashion Week starting in a few days, we bring you the inspiring story of model Kiara Pace. Her progress is taking place step by step. She is working as a model, living in New York City and most importantly, living her dream.

In the two years she has been in New York since moving from Florida, Kiara Pace says this about her progress:

Moving to the Fashion Capital of America no doubt comes with some interesting experiences. On the lessons she has learned as a model in the big city, she says this:

“I learned that things take time. I shouldn’t expect to come up here and do what I want to do from the bag, like I had to work my way in just like I did in Florida. I learned about saving. Oh yeah. Things are expensive here from toilet paper to a sandwich. Everything’s expensive, but you learn that you only need to get what you need and don’t worry about everything that you want because New York will make you think you need everything, especially going on Fifth Ave for shops. I stay away.”

To all the models across the country who are thinking about moving to New York, to further their career, Kiara says she did things the hard way, but two years later, she has settled into a life and made it happen:

“I ended up making enough money and selling my car to save and I literally moved up here without an apartment. Moved up here, stayed in a hotel for a week, found an apartment and moved in. So I mean, I choose the rough way, but any way you can, like, any type of way to get into New York because once you’re here, anything’s possible.”

Find more information about model Kiara Pace and her work at her official website clicking here.