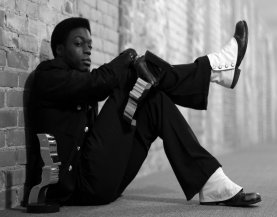 Rising actors dream of working with a cast of Hollywood legends, Cle Bennett was fortunate enough to get that opportunity in Barney’s Version. The film – starring Dustin Hoffman and Paul Giamatti – is one of 2010’s under the radar movies. It’s receiving wide award recognition and will hit theaters next Friday. In fact, Giamatti has already received a Golden Globe nomination for his role in the picture.

Bennett recently received recognition from the Gemini Awards [Canada’s Broadcast Television Award Ceremony] for his role in the HBO series The Line, as well as the mini-series Guns. He is one of only a few actors to win two Gemini Awards in the same year. In his parting message from his award speech that evening he said, “Just understand, anything’s possible, I’m the proof.” The message was not about him. It was a message to inspire young men to do positive things with their lives. He was an example they could.

“I wasn’t really speaking about me per say when I said that. I was really trying to get the message out to the young brothers who I was speaking to because the irony of it was that I’m being handed a trophy, both of those trophies, because I was pretending to be these kids in the streets. I wanted them to see that if you just channel that energy, all that energy you have into something positive, you can achieve something that you can be proud of and I’m the proof of that.”

Barney’s Version is a movie based on the novel by award winning writer Mordeaci Richler. As mentioned, the film is getting award recognition from various organizations. Bennett’s cast-mate – Paul Giamatti, who plays Barney – just received a coveted Golden Globe nomination for his role. Cle believes it’s the sleeper movie of the year, one that everyone needs to see.

“This role was definitely the biggest opportunity for me to work with a cast of that caliber. I’m working with Dustin Hoffman and Paul Giamatti; these are actors that I adore. Just to be able to work on the same team as these guys was just a big honor for me…I’m really proud of this film. Obviously I’ve seen it a number of times, but every time I see it, I love it. It’s just a great story and the credit goes to everybody who’s a part of this…Mordeachi Richler’s book, it’s a huge story. It spans like 30, 40 years. To be able to crunch it down into two hours and still make it flow like it’s a story that’s well told and you don’t feel like you’re missing anything, that’s a big feat and I give everybody credit who’s part of it.”

After Paul Giamatti received his Golden Globe nomination, Bennett says his co-star deserves an Oscar Nomination for his lead role as Barney.

“I think he deserves it. He makes you believe him…Barney is not really a likable guy. He’s a bit of an ass actually, but he makes you love him. He cheats on his wives and stuff like that. He talks bad to a couple of people. You watch this guy and you’re really rooting for him…To take a character like that and make the audience just feel and just root for you like that, he did it man and the way they made it span over – you see the growth in him from the 70s to the present day. You see the growth and he captured that beautifully man. I hope he gets that Oscar.”

Imagine getting the opportunity to have a dance off with a Hollywood legend. Only it’s not on Dancing with the Stars. While shooting a wedding scene in the movie, Bennett and Hoffman got into an impromptu dance off. Getting the chance to work with the Oscar legend taught Cle that he’s in the right field as an actor. He hopes to have a career as long as Hoffman’s.

“The funny thing about is, it’s not even a scene. We’re shooting a wedding scene and we’re just dancing. We’re in the background with the background cast. Dustin, he’s with a lady and I was with a lady. But the scene was focused on Paul and Minnie [Driver]. We were just fooling around and then they said cut, and Dustin is looking at me like, ah, I gotcha you on that one. I’m like, ‘Oh. Shoot. I didn’t know we’re battling dude.’ So then we just had this dance off. But it’s not in the movie at all. It was just us messing around…Just watching Dustin, I learned that I’m in the right business cause I would love to be, not that he’s old or anything – it’s funny because when I met him, I said to him, ‘You know it’s an honor to meet you.’ He said, ‘Ah, you’re making me feel old.’ I’m like, ‘Oh, it’s got nothing to do with old sir.’ But I would love to be doing this for as many years as he’s been doing it and still enjoy it the way he’s enjoying it. The guy’s having a ball on set and I want that for myself as well.”

We, at CYInterview, wish Cle the best in the future as he continues to broaden his acting horizons.

You can find out more about Barney’s Version at the following link:
http://www.barneysversionthemovie.com

One Reply to “Up and Comer Cle Bennett: On Barney’s Version, Paul Giamatti and Dustin Hoffman”