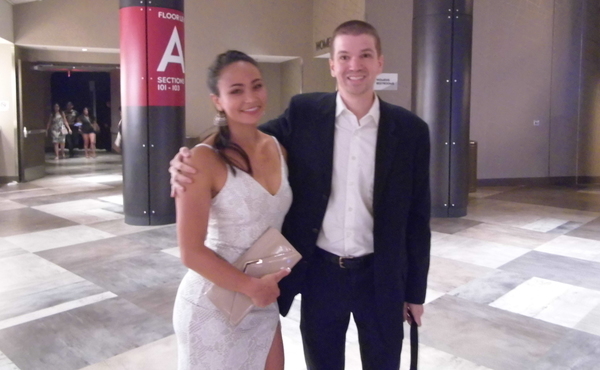 While attending the UFC Hall of fame ceremonies in Las Vegas, I had the chance to catch up with Michelle Waterson [see photo above.] If you are not a close follower of the UFC, you might be thinking that Ms. Waterson works as a ring card girl for the promotion. Certainly, she could. Michelle, however, is a fighter in the Strawweight division. She is a proficient fighter at that, with a background in Karate, Muay Thai and Brazilian Jiu-Jitsu.

Michelle Waterson may be best known to fight fans by her moniker, “The Karate Hottie.” Her career MMA career record is 16 wins and 5 loses. She fights out of Jackson Wink MMA Academy in Albuquerque, New Mexico. You might remember that Holly Holm, who took the Bantamweight title from Ronda Rousey, who was just inducted into the Hall of Fame, fights out of Jackson Wink.

Waterson’s fighting credentials include a black belt in karate and a purple bet in Brazilian jiu-jitsu. She is the former Invicta Atomweight champion. Her accomplishments speak for themselves. Fans can keep up with Michelle Waterson on YouTube, where she showcases different how to martial arts videos, cooking tips and more. You can check it out clicking here.