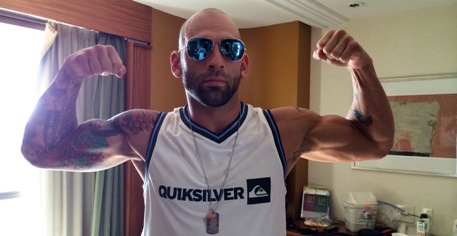 After more than a dozen fights for various mixed martial arts organizations, George Sullivan is living the dream. A New Jersey native now under contract with the UFC, Mr. Sullivan will have a chance to fight in front of a home crowd this coming Saturday night April 18th, on the FOX Sports TV UFC 15 card. This will be his third fight with the UFC. He has won the first two. Perhaps, we will be seeing him on pay per view out of Las Vegas in the near future.

Away from the cage, the mixed martial artist has taken on the battle against bullying. He has spoken out to many young people, across the United States, on the subject. Mr. Sullivan uses his tough guy fighter persona in a way that demonstrates how to behave with respect and decency, away from the cage, in an effort to inspire kids.

We had a chance to speak with George about those topics and more. You can read the highlights and listen to the entire CYInterview below:

“This is my third fight now. It’s a tough fight. It’s in front of my friends and family. So I’m gonna give it everything I got. I’m super excited. … I feel like I’m the bigger, stronger guy. He’s very technical, a lot of elbows, a lot of knees. But I’ll be ready for it, you know. I just want to overwhelm him. I’m very excited to fight him though. He’s been in the UFC for so long. So it’s a big win to beat him, you know.”

This will be his first fight since September. Since he is under UFC contract, the organization tells him when to fight. The new UFC talent says he does not mind that he had to wait so long between fights:

“I don’t mind waiting. That way I get to fight the best in the world. It’s kind of worth it, you know what I mean? I don’t want to just take these no name fights and just fight to make pennies. I want to try to make a career out of this. The only real way to do that is to fight for these major organizations. UFC is the biggest, so it’s an honor to even be considered one of their fighters. … I’ve knocked out 14 people in my life. I have 12 knockouts as a professional MMA guy. So I definitely have power, I like to hit. But I do know submissions, but I would say I am a striker or a ground and pound fighter.”

Away from the cage, Mr. Sullivan has started his own anti-bullying movement. He shares his story:

“As a kid, I was bullied. Our father was in prison, kids took it out on me. I got made fun of for being raised by women, mom lost her house. I went through some hard times, but I came out pretty good. And now I see these kids dealing with social media. One day I woke up, this was about two years ago and I read that a little girl in Florida had hung herself and she asked her father for help and he wouldn’t help her. He said this is just a phase, don’t worry about it. She left him a note and said, ‘Nobody would help me but you. My own father wouldn’t help me. I’m taking my own life, I can’t take it anymore.’ And she was beautiful.

She was in a Hispanic, black area and she’s like, I forget what she was, she was a different race. I don’t remember the race off the top of my head, but she was picked on for being different. And it broke my heart. And I said, ‘You know what? I’m not gonna stand by this. I am gonna help the kids like I can.’ So I am in Hawaii on my honeymoon and I got contacted I was started to speak to schools. And I spoke to these kids in Hawaii and I helped them. Kids that were in gangs, I got them out of gangs. They call me to this day. … All these schools, these kids lineup to talk to me and I just want to show them that they’re not alone…

They’re changing my life and I’m going after the bully. You know, if they can see a guy who’s violent and fights, but he’s respectful and humble, that’s what I’m after. You know, and perfect example was the last kids I talked to in Jersey City by Jersey City, two kids stand up and they apologize to the kids they were bullying and started crying and that’s what meant everything to me, you know, to see these kids showing that they can change.”

As far as what else we should know about him, George Sullivan had this to say:

“I just want them to know that, you know, I am a hardworking fighter who fights for his wife, his friends, his family and his fans. I’m not your typical guy who fights just to be some tough guy that walks into places like, oh that guy fights. As much as I enjoy it. I think it’s the best sport in the world. Just a hardworking guy and if anybody out there doesn’t think they can get their dream to happen, I visualized UFC gloves on my hands for seven years and I finally got there. So if I can do it, anybody else can do it.”

You can keep up with George Sullivan on his Facebook page here.