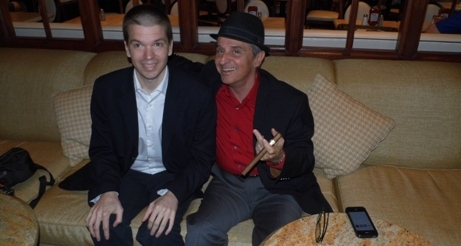 On Thursday night July 5th, the creator and co-founder of the UFC, Art Davie, took his rightful place in the UFC Hall of Fame during the 2018 ceremonies at the Pearl Theatre at Palms Resort and Casino in Las Vegas. Since 2014, Art has appeared with us on numerous occasions here on CYInterview, speaking on a variety of mixed martial arts topics. Additionally, he has discussed with us, in detail, the dream he had of having the best fighters in the world fight each other. It was that dream, and his persistence in working to make it a reality, which led to the first UFC back on November 12, 1993.

The entire story of his dream and the work that it took to bring it to fruition is covered in his book, Is This Legal? The Inside Story of the First UFC from the Man Who Created It. It was fitting that his co-author, MMA commentator Sean Wheelock, spoke at his induction into the Hall of Fame. In fact, Sean was one of the 86592 individuals who ordered the first UFC. In his induction speech for Art, Sean said of the UFC co-founder, “Without even realizing it, Art not only created the UFC, he actually did create mixed martial arts.”

What followed Sean Wheelock’s speech was a video looking back at the early days of the UFC, which included comments from the likes of Don Frye, UFC commentator Jon Anik, Brett Okamoto of ESPN and John Morgan of USA Today Sports. In the video, Don Frye said of Art Davie, “He created the Ultimate Fighting Championship and he changed the world and nothing’s been the same since.”

Art took the stage after being introduced by Mr. Wheelock, in front of a crowd including some of his friends and colleagues from the first UFC. It was an exciting moment to see the creator of the UFC get inducted into the UFC Hall of Fame on the 25th anniversary of the company’s existence.

Mr. Davie spoke about his persistence in pursuing his passion and the history of bringing the UFC to life. For those who have not read Art’s book, his presentation can serve as a tutorial on how the sport of mixed martial arts began in America. Though some might claim the best fighters in the world did not participate in the first UFC, Art said this to the audience at the Pearl Theatre, “They were the only ones with the balls to show up.”

His speech also covered his departure from the UFC and how he had no regrets. He admitted that he took the UFC as far as he could and credited others for the company existing today, including Dana White and Lorenzo and Frank Ferttita. Had they not continued forward he told the crowd, “Art Davie wouldn’t be here tonight.”

At the end of his speech, Art thanked the 1,793 fighters that have climbed in the octagon since the first event back in 1993, the current employees of the company and the fans. To watch the full speech with Art Davie and see the other inductees including fighters Ronda Rousey and Matt Serra, the fight induction for the Dan Henderson vs. Mauricio Rua match and the induction of UFC TV producer Bruce Connal, you can watch the replay of the entire event on UFC Fight Pass.

After the ceremonies concluded, we caught up with Art, at the Palms Hotel and Casino, to get his thoughts on being a UFC Hall of Famer. You will find a picture below, from after the event, of Art, Sean Wheelock and me.

You can read some of the highlights and listen to the entire CYInterview below:

Reflecting on now being a UFC Hall of Famer, Art Davie said this:

“I really think that this is an honor, that for me, made a lot of sense because after 25 years to get the official validation that I’m the creator and co-founder, you know there’s probably a lot of kids out there now who are going to know who I am, that probably didn’t know me before.”

What was he most proud of from his UFC Hall of Fame speech?

“I think the idea that I didn’t create the UFC that the UFC created Art Davie. I think that was an important point for me to make. The UFC created all of us. There’s now people all linked all over the world that are crazy about MMA and are doing it and it’s a culture and it’s spawned clothing and it’s spawned lifestyle choices and it’s given a lot of jobs to a lot of people.”

On what it meant to be up on stage standing next to fellow inductee Ronda Rousey at the end of the UFC Hall of Fame ceremonies, Art jokingly told us this:

“Well, for me, it was also a question of recognizing that it was pretty frustrating standing next to Ronda. You gotta remember that she’s a lot younger than I am; she’s a lot better looking than I am; she’s actually bigger than I am. She can kick my ass for sure and I realize she actually has more money than I do. I realize that I’d like in the next life to come back as Ronda Rousey.”

2 Replies to “UFC Creator/Co-Founder Art Davie Gets His Due: CYInterview Speaks with Him after Induction Ceremony for UFC Hall of Fame at Palms Resort and Casino in Las Vegas; Says UFC Made Him, Wants to Come Back as Ronda Rousey, More”