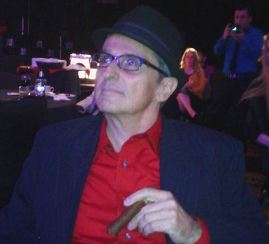 Today, Dana White, the president of the UFC, announced that the mixed martial sports organization he heads would be sold for $4 Billion, to WME-IMG. This is reportedly the largest sale of a sports organization in history. None of this would have been possible without UFC co-founder Art Davie’s vision to bring the best fighters in the world together, back at the first UFC in 1993. Art’s book, Is This Legal?, goes into great detail about how the UFC came to be.

We recently spoke with Art in May at Wynn Las Vegas, about a variety of topics [see here]. Now, Mr. Davie is back to tell us what he thinks the sale of the UFC means for the future of mixed martial arts. Additionally, he provides an update regarding his life story being made into a feature film.

On the sale of the UFC to WME-IMG, Art said this:

“I think that some fans are gonna be apprehensive that, you know, this might represent the type of change that might make the UFC more like other major sports, but I think that ultimately that’s a positive. And I’ve always said that the potential for mixed martial arts as a sport to grow, is always been I think enormous because when you look at the sports available to young people around the world, the martial arts are something that every culture, every country has some footprint within that universe. So the potential for MMA to become even larger on a global stage, I think is there.”

On why UFC majority owners Lorenzo Fertitta and Frank Fertitta III sold the company, the UFC co-founder shares his thoughts:

“There are those who look at this point in time and they point to a number of developments, which may have influenced, and I can’t say whether or not this is the case, this is speculation, but people have brought up that issue that eventually the sport may face some significant response when it comes to the issue of CTE as the NFL has had to deal with. And certainly there’s evidence going back to the beginning of 23 years ago that some athletes have suffered some degree of impairment. So that issue I think looms large in the future. I think that that’s an issue for the leading brand to have to come to grips with.

There’s a lawmaker in Oklahoma that’s been attempting to broaden the outreach for the Ali Boxing Act to include MMA. And I think that that potential here in North America could have a powerful impact. Also, people have pointed out that the renewal of the agreement with Fox television, which was a landmark opportunity five years ago, represents a great infusion of capital into the franchise and the brand. And if one were the Fertittas and Zuffa the opportunity to sell at this point looking at what may be a billion dollar contract next year with Fox would, you know, make the property even that more attractive. So it could be a number of factors came together to give them the impetus to sell at this time.”

In May, when we spoke with Art Davie at Wynn Las Vegas [see here], he shared with us new developments about his book Is This Legal? being made into a movie. On what has happened since May, Art told us he just traveled with two members of his film project team, to Torrance, California, to show them where he worked during the beginning stages of the UFC:

“Well, Legacy Entertainment Partners has contracted with Dena Hysell to do some script doctor work on it. She’s turning in her first draft this Friday. I met with Dena and Robert Latham Brown, our production manager in Torrance the week before last to walk them through the nexus of locations that was right at the heart of what I was able to do 25 to 23 years ago right there in Torrance: my apartment, my personal office in that same building, the WOW office within 25 yards, the Gracie Academy within another few feet and the Brazilian restaurant By Brazil where I would have lunch every Friday with Rorion Gracie. So we had an opportunity to revisit those locations both for the writer and for the production manager who is looking in Atlanta where we hope to film Is This Legal? sometime next year and to secure locations that are consistent with what’s in the book and with what’s in the script.

Also today, Gena Vazquez, the principal over at Legacy Entertainment Partners, tells me that her relationship with Ari Emanuel over at William Morris Endeavor is such that she is going to look forward to getting him both the book and the script within the next few weeks. So my relationship with William Morris Endeavor, I’ve got a good friend over there who’s on the board of directors, who’s been a great support of what I’ve done in the past. And it’s conceivable that the new ownership of the UFC may look favorably on some of the things we’re working on and we’ll have to see as things develop. But we’re very excited about the script as it’s moving forward, the project as it’s moving forward, hope to be in front of the cameras sometime in 2017.”