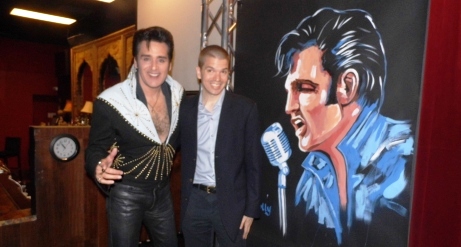 On Fremont Street in Downtown Las Vegas, Elvis Impersonator Steve Connolly’s Spirit of the King show at the Four Queens Resort and Casino had staying power for years.

Yesterday, the musician, singer and past CYInterview guest announced, on his Facebook page, that his show at the resort would be ending. Mr. Connolly has performed his show thousands of times in Las Vegas and beyond. Some of his prominent audience members include former President Bill Clinton and Steven Tyler of Aerosmith.

Few are more important to Las Vegas’s history than Elvis Presley. His run at the International Hotel and Casino from 1969 to 1976 included over 600 sold out shows. Years later, Elvis enthusiasts would take in Mr. Connolly’s show, enjoying a terrific tribute to the King of Rock ‘n’ Roll.

Aside from being a Las Vegas entertainer, Mr. Connolly is also an artist. During the pandemic, he created a new website, www.steveconnollyart.com, showcasing his paintings and his life as an Elvis impersonator.

Though he wanted to return to his show at the Four Queens Resort and Casino, Mr. Connolly stated, on his Facebook page, that there was a lot for him to be positive about:

“The good news is that I’ll be able to focus more on my art work, painting /sculpture & planning show dates.”

In 2015, we attended Steve’s show at the Four Queens and CYInterviewed him after the performance. You can read the highlights and hear that CYInterview by clicking here.

We would not be surprised if another resort picks up his show in the future. The spirit of the King truly does live on through his Elvis tribute show.