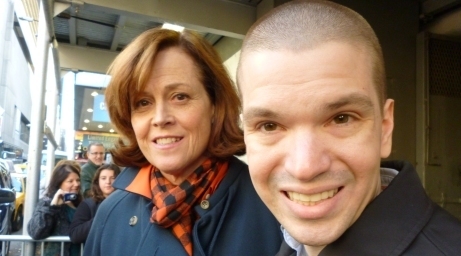 It has been called the funniest show in New York City. The Broadway play Vanya and Sonia and Masha and Spike will keep you laughing from the first minute to the last. It recently received a nomination for Best Play at the upcoming Tony Awards, to be held in June. Many believe it is favored to win the coveted award.

Set in Pennsylvania, the play focuses on two adult children, a brother and sister: Vanya played by Emmy winning actor David Hyde Pierce – best known for his role as Niles in the sitcom Frasier – and Sonia, played by actress Kristine Nielsen. Both characters spend their lives living at home and taking care of their parents for 15 years, until their folks pass away. They continue living in the home thereafter.

This leads Vanya and Sonia to not experience much joy or growth in their lives. Both are unemployed and sit around every day waiting to watch the birds fly by. They both believe their lives are over and that things will only get worse. Both David and Kristine received Best Lead Actor and Best Lead Actress nominations, in their respected categories, at the upcoming Tony Awards.

The play reaches a moment of crisis, when Vanya and Sonia’s famous actress sister Masha wants to sell the family home. Masha, as it happens, has been paying the upkeep on the house, which has provided a place for her siblings to live. Masha is played by three-time Oscar nominated actress Sigourney Weaver. Above you can see Sigourney after the show let out, along with yours truly.

Warnings of bad news for Sonia and Vanya were predicted by their housekeeper and psychic friend Cassandra, played by actress Shalita Grant. Cassandra interjects herself in everyone’s business and warns them of what lies ahead in their lives. For her performance, Shalita received a Tony nomination for Best Performance by an Actress in a Featured Role.

Though Masha might be more independent, successful and wealthy than her brother and sister, her level of insecurity about where she is professionally and personally come to the forefront. She must always win, and be recognized as the best, or she is dissatisfied.

Masha has been married numerous times and now has a boyfriend many years younger than her, named Spike. Spike, played by actor Billy Magnussen, is in his 20s. He is young and physically fit, but he is disrespectful to all of the elders except for his girlfriend, Masha and Nina, the next door neighbor, who played by actress Genevieve Angelson. Masha is jealous of Nina’s youth, even as Nina looks up to Masha because she is a big time actress.

Vanya and Sonia and Masha and Spike is full of laughs. It is relatable to those who might feel their lives have passed them by, without accomplishing something or loving someone. The play has a humorous way of analyzing midlife crisis. The cast compliments one another, bringing out each performer’s strengths.

The play is highly entertaining, but it will make you think about the state of your life. All of us have the potential to be our very best and it is never too late to make a change for the better. If you are looking for endless laughs while in New York City, as well as food for thought, this the show for you.

You can find more information and purchase tickets to Vanya and Sonia and Masha and Spike at their official website clicking here.

2 Replies to “Tony Award Nominated Play Vanya and Sonia and Masha and Spike Full of Laughs; CYInterview Catches Up With Stars Sigourney Weaver and Kristine Nielsen on Broadway”