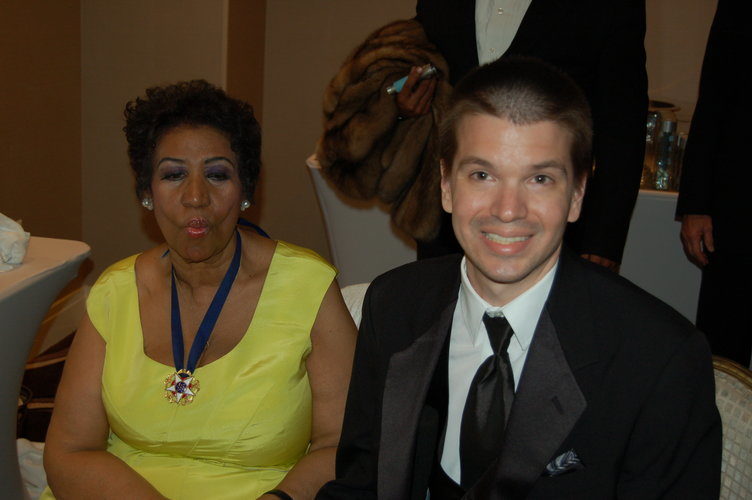 With the Grammy Awards this evening on CBS, we decided to go down memory lane and take a look at which music star we have covered here on CYInterview who has, to date, won the most Grammys.

After doing some research through our archives, the answer is none other than the late, great Queen of Soul, Aretha Franklin. The legendary Ms. Franklin won 18 of the awards. Her first two Grammy wins were for her hit song Respect back in 1968. After her passing in 2018, we paid tribute to her, recapping the night we met the music legend in Miami Beach at The Blacks’ Annual Gala in 2014, after a concert performance. You can read that tribute by clicking here.

You can see our photo with Aretha Franklin, from that evening, above.

Only a handful of artists have more Grammy Awards than Aretha Franklin. Those include: Stevie Wonder, Bruce Springsteen, U2, Vince Gill, Beyonce, among others.

Last year, the Grammys paid tribute to Aretha Franklin with a TV special on March 10th, titled Aretha! A Grammy Celebration for the Queen of Soul. The program included tribute performances from Las Vegas’s own Celine Dion, Jennifer Hudson, John Legend and Janelle Monae among others.

On the Las Vegas front, we CYInterviewed Aretha Franklin impersonator and tribute artist Denita Asberry, during her run with the longest running show on the Las Vegas Strip, Legends in Concert, back in 2018. You can see that coverage by clicking here.

Advance congratulations to all the award winners at tonight’s award ceremony.