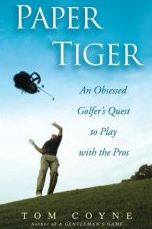 Being a professional golfer might be the hardest thing to become in all of professional sports. Golf writer Tom Coyne spent over a year on his quest to make the PGA Tour going all over the world to play the game he loves. The entire journey is featured in his new book Paper Tiger. It’s a true inside look at the world of golf, and where Tom comes in contact with many golf pros, trainers, psychologists, and many others that share his golf interest.

Listen to the Tom Coyne CYInterview:

Tom Coyne: “I am doing great Chris. Thanks for having me.”

CY: Paper Tiger is a book you wrote about yourself taking one year off to chase your dream to make it to the PGA Tour. What motivated you to want to chase this dream and reflect back on it in the book?

TC: “I think it’s sort of the reason I want to play golf at all. The reason that anybody keeps going out and plays this impossible ridiculous game. As hard as golf is, as expensive it is, it is difficult. You hit that one good shot and you say that’s enough to bring you back for tomorrow. Well, then you say well what if tomorrow I could hit five good shots or ten good shots. What if I could really figure this out. I am going to find out because everyone sort of wonders when you go out there. What if we didn’t have to go to work and there wasn’t a spouse or kids. We didn’t have to worry about anything. All we had to do was play and worry about the things the pros think about. I am going to do that and see how good I get. That’s what I did. I dedicated all my resources and all my time for about a year and a half to just playing golf.”

CY: Is there any way to compare how hard it is to make it to the PGA Tour to anything else?

TC: “I don’t think so. In terms of the odds, going through the Q-School of the 1000 greatest golfers in the world that are teeing it up to make it through, 25 or 30 of them will make it through that tournament. Those odds are so incredibly set against you. That doesn’t count the millions of good golfers that are out there. It’s just the top one of one percent that are trying to make it. That’s sort of what the story is about too. I think people when they talk about or say their friend is a good golfer or the pro at my club is the best golfer I have ever seen, I don’t think they have a sense for how much golf talent is out there and what it really means to be great at golf. How good these guys are, even the guys whose names they don’t know, how really good and special those plays are.”

CY: You ended up spending $52,000 through the whole journey. Was it worth it looking back on it?

TC: “Yeah. Absolutely. That’s just what I put on my credit cards. I probably ended up spending more. If you haven’t figured it out yet I am not on tour this week. I didn’t play in the US Open. I am not playing golf for a living now, but I will never have to say what if. In a way I certainly enjoy golf more now. I enjoy a lot more things now. Once you dedicate yourself to something so intensely and so thoroughly you learn a lot about yourself. It was certainly worth it.”

CY: Why do you think you are so hard on yourself in the book through your one year of golf tournaments and practice before hoping to go to Q-School?

TC: “I am hard on it myself. Maybe too hard on myself. As I am going through this I got to have fun with this. I met a lot of players who are out grinding themselves on these mini tours or sort of in the same position I was. When you give all your time and all your resources to golf and you still can’t hit the ball straight it literally breaks your heart. I talk about it in the book. It’s sort of a golf depression. Not that it’s a depressing book. It’s a very funny book. I am actually depressed and upset with myself because this is what I set out to do. I need to hit just as good as the pros or anyone can hit. I have that moment and then hit a shot like I have never hit a golf ball before. Unless you have a very sort of self-effacing I am not greater than the game and take what I can get attitude, I don’t know how you could get through something like that.”

CY: How much did 2000 PGA Teacher of the Year Jim Suttie help your golf game?

TC: “I think a lot. I don’t sort of end up making it through the Q-School, but looking at my scores I ended up shooting in the 80s to being pretty comfortable going around and shooting in the 70s. I went down 12 or 13 strokes. That was pretty amazing. Now getting everything I learned from Dr. Suttie out on the range to the golf course and competition was really hard to do. I struggled in a lot of tournaments because of that. I worked with Dr. Robert Winters who was a great sports psychologist. He really sort of helped me in that process and I think helped me have a number of tournament successes. Doing that all the time and believing that I was that player all the time was tough. What I learned about the golf swing that I will have for the rest of my life is amazing. He is a brilliant man. Being able to listen and learn from him for as much time as I did was a great part of the experience. I think that relationship is a great part of the story.”

CY: He even thought you could easily compete on the PGA, European, or Canadian Tour. What do you think he saw in you?

TC: “I think he saw that I was working my butt off. I think that’s the way everyone responded that was on my team. I think they responded to the fact that I wasn’t pulling any punches. I was out there every day hitting 1000 balls. They couldn’t get rid of me. I think he certainly responded to that. When you put me on the monitor and put my swing up against someone on the tour, I was hitting it where my swing needed to be. Now whether I went out and hit it down the middle or get nervous and hit it through the white stakes that was up to me. Sometimes that happens.”

CY: How much did the trip to Florida help your game before the Nationwide Tour, PGA, and USGA sectional events you played?

TC: “It is a golf universe. I had to go to Florida. I was living in Philadelphia. I had to go there for the winter because I was playing every day. All the golf, all the coaches, and players are there. Certainly in Arizona, California, and Texas as well. South Florida on both coasts is where the golf is at. Just so much rubs off in you when you get to practice next to these guys who are playing for a living and are on these mini tours. I started to learn about what scores I might have to shoot. Par isn’t good enough. Par is for wimps. These guys can really dispatch and destroy golf courses. It was important for me to go there and live around them and see what their routines were like. Try to copy what these guys were doing. Florida is sort of an interesting place. It was eye opening.”

CY: You played in the US Public Links qualifier against Michelle Wie in Harrisburg, Pennsylvania. You shot a 72 for your first 18, but shot an 80 for your second 18. What happened that day on the second 18?

TC: “It was funny. We played 36 in one day. The second 18 was the game day. I probably had not done that before. It was such a grind for me. I was actually one under on the 18th tee. It was just so exciting and I ground so hard. I bogeyed the last hole, but finished 72. I was right there in the top five or four in the scoreboard. Maybe I had just let it all out on the 18 and by the second 18 I was still swinging, but instead of grinding over that six footer I would lip it out, instead of really thinking about if it was a seven or an eight I was just kind of stepping up and hitting it. That happens. I was pretty proud at how I played that day. Maybe things would have been different, but it was another day.”

CY: You end up not meeting all the qualifications to have an entry into the PGA Q-School. How did it feel and why did you decide to go to Australia to play that qualifier, which would be the final rounds of your competitive life?

TC: “I played various Q-Schools. I ended up going to Australia, but I wouldn’t have if I would have gotten into the US PGA Tour Qualifying School. They decided my tournament records weren’t sufficient because I hadn’t played with a judge, which is two or four day tournaments on a resume that are USGA and NCAA tournaments. That’s not really the tournaments I had access to. I was playing one day qualifiers. Everything I could get into. Every pro am or charity. I am not playing in the NCAA Championship. I am 30 years old. I am not playing in the Sony Classic. I didn’t really know that was going to be the case. I say there is another place for me. When nobody else wants you where do you go? You go down under. I packed up my bags and we’re going to go play the Q-School in Australia. What a great trip. There was a lot of good golf down there too. It was a great place to end the story.”

CY: Finally, your final line in your book is, “I am the most fortunate, failed golfer in the world.” Why do you think that?

TC: “What this story becomes about is the relationships and the people that were around this certain obsession, especially my caddy and my girlfriend Allyson who is actually now my wife. That gives away a little of the story. All these people are looking at this crazy thing that I am doing and they say go for it. Dr. Suttie, Dr. Winters, Allyson, and everybody who was behind me. I felt so fortunate for that and that I had the chance to do this. So many of these guys miss the cut and don’t know what else to do. Other things and other people were supporting me in life no matter if the putts went in or not.”

You can find more information or purchase a copy of Paper Tiger at the link: