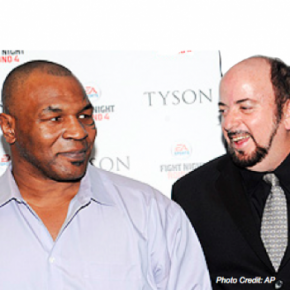 The anticipated release of Mike Tyson’s documentary Tyson hits theaters this Friday in New York and Los Angeles. Director James Toback explains why people are shedding tears after seeing this film and what’s in Tyson’s future.

Listen to the James Toback CYInterview:

Chris Yandek: There has been a lot of tears out there, including from women. Why do you think people are showing these deep emotions after seeing your film?

James Toback: “That’s been astonishing to me, particularly when it is been coming as it has been from women who go into the film with a almost an unadulterated negative sense of a dislike of Mike, a lack of interest in boxing and no interest in seeing the movie.

Yet by the end they have been in tears and have been moved and stirred. It was certainly not intentional. I did not make it with the idea of affecting people that way. It was an effect that surprised me in a way almost as much as it surprised the people who were experiencing it.”

CY: Do you think the women go in with these perceived negative conclusions?

JT: “I think the two most difficult things for most people to get by before they see the movie and in terms of wanting to see the movie or being willing to see it are the rape conviction and the biting of Holyfield’s ear.”

CY: And how do you think their conclusions changed after seeing your film?

JT: “Well, I think in those two issues it’s hard to listen to Mike talking about the rape conviction and still to believe it was a just conviction. It’s also all but impossible to see the Holyfield fight Mike’s stirring and riveting voiceover, narration and not believe that it was the response to vicious, continual, intentional head butting on Holyfield’s part in both parts.”

JT: “My intention all along knowing him, having known him as well as I do for as long as I have, my intention was to allow him to in a stream of consciousness fashion to express anything he wanted to about any subject that came up and not to interrupt, not to grill him, not to be prosecutorial but allow him to create a self portrait. Then one is free to judge that self portrait in any way one chooses. It isn’t that there is an advocacy going on.

CY: Do you think people still care about this guy?

JT: “They care about him after not having cared about him. That’s the thing. The ones who care about him, going in love the movie. They just say this is a different and larger and more fascinating Mike Tyson than I thought. Thank you for giving him to me. The ones who did not want to see the movie, didn’t like Mike Tyson, almost against their will end up caring about him.

The most typical example of that and it sort of crystallizes it is Gay Talese, the great journalist reporter who wrote Honor Thy Father and The Neighbors Wife among many other substantial books, The Kingdom of The Glory. His wife Nancy Talese is one of Doubleday’s top editors of the last 35-40 years.

She told me after a screening up at Sony Classics a few weeks ago that Gay had literally dragged her to the screening. That she actually said to him, ‘If you make me see this movie, I am going to be in a foul mood for days. It’s not worth it. Don’t do it. I will dislike it and I’ll be angry that you made me see it.” And he insisted. She came along. She said, ‘I was overwhelmed by the movie and I want to see it again right away.”

CY: Given the state that Mike is probably not going to be boxing anywhere in the near future and given the fact he earned somewhere between 300 and 400 million dollars in his career, declared bankruptcy in recent years, what is his financial status today?

JT: “I don’t know because I am certainly not his accountant but I do know that he lives nicely. He obviously doesn’t have anything like he had and he talks about that in the movie, but he also lives comfortably and well one might say how could one go through such money. At the same time, one is not going to shed a tear if one is shedding tears for his financial situation.”

CY: So what does he want to do now in the future going forward if he’s not gonna box?

JT: “That’s part of what he gets into in the movie and I think it’s not clear. He has certain things coming up. He has an autobiography that he’s writing with a writer, guy who did Bob Dylan’s book. He’s also got a sort of Wii typed virtual reality game with Muhammad Ali that’s coming out. He loves spending time with his kids. I think he’s in a state of transition from something to something that is not quite clear.”

CY: Do you think he has any idea of what he’d like to do in the future if he doesn’t have specific plans?

JT: “The last line in the movie, which is quite haunting the way it’s delivered is the past is history, the future is a mystery. I think that while that’s true of the human condition as a whole it’s particularly true of him.”

CY: You have all these people shedding tears. As a director, why do you think people shed tears after the things people will say, ‘Man I can’t believe that about him. My opinion has totally changed or my perspective has changed.’

JT: “It’s the disarming ability. It isn’t even ability, it’s a necessity with him to speak without inhibition and without coloring it, without censorship. So you get a feeling that a human being is coming to you authentically as himself with no attempt to manipulate or affect even the way you think about him.

There is something about that raw honesty that in its of itself is appealing. Then when you think of everything he’s gone through and the suffering and the mistakes he admits to, all of that makes him a kind of riveting, tragic figure. That word tragedy has been used over and over again by people who’ve seen the movie including by him.

When he first saw it, he said to me, his first comment, ‘It’s like a Greek tragedy. The only problem is that I’m the subject.’ There is that stature to the story because it’s someone who started with absolutely nothing.”

You can find more out about Tyson at the following link: http://www.sonyclassics.com/tyson/