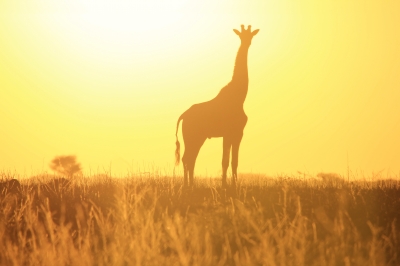 [*Author’s Note: This is a work of fiction. Any similarities between the characters in this tale and any giraffe, owl, llama, lion, dolphin or other animal or person, living or dead, are merely coincidental.]

Giraffes are tall. We all know this. But Tiny was the tallest giraffe in his tower. Tower, it is said, is what you call a group of giraffes. A herd of hippos, a gaggle of geese, a tower of giraffes – interesting. Anyway, being a particularly tall giraffe carries with it pros and cons. Certainly, it can make you the pride of your tower. At the same time, it can make it difficult to speak with your other friends in the jungle.

Tiny was a fine, friendly giraffe and he had many friends in the animal kingdom. He was good friends with hippos and hermit crabs, rhinos and rabbits, monkeys and mules, lions and llamas, etc. This meant a lot of bending his neck to speak with his friends. And over time, Tiny’s neck and back began to ache. So, he did what any reasonable, particularly tall giraffe would do. He decided to consult a neckologist.

Upon arrival at the neckologist’s office, Tiny was asked to fill out a bunch of forms detailing his habits and where exactly he was experiencing pain. Within no time, the neckologist came into the office and began to do a thorough examination of the very tall giraffe’s neck.

“Based on my examination and a read through of your forms, and considering your habits and where the pain is, I have one suggestion.”

Tiny, in considerable pain, could not wait to hear the suggestion of this expert, so he implored him to continue, “Please, by all means, tell me what I can do to ease the aching.” And with that, the neckologist blurted back, “Find taller friends. Good luck. You can pay on the way out.”

Tiny was absolutely flabbergasted. He was not, under any circumstances, going to drop his friends. But what of his pain? He was so dejected that he sat back down in the neckologist’s waiting room. Next to him sat an owl.

The owl, seeing how dejected Tiny was, could not help but to ask him a question, “Hey friend, you look so sad, what’s wrong?” Tiny explained what the neckologist had just said to him. He then remarked, “And I guess you are here because as an owl, you turn your head a lot and that must cause neck pain.”

“Well, actually no. I am just waiting here for my friend. She is a llama and dealing with a neck issue. Thankfully, I have no neck pain,” he hooted. Then he went on, “Sure, turning your head a lot can cause neck issues, but when my neck gets tired, I just ask friends to sit in front of me, so I can see them, rather than continuously moving my neck. That or I move my body.”

With that, Tiny got up, thanked the owl for the chat, wished him well and left.

Back in the jungle, Tiny gathered his friends together and told them he had an idea. The giraffes nodded their heads in agreement. Then they got to work. This tower of giraffes would build a variety of platforms of different heights – accessible by stairs or elevators – to accommodate their friends of varying heights. This way, when they got together for a chat, a cup of coffee or and an evening get together, their friends could mount the platforms and the giraffes would not have to constantly bend their necks. And their friends would not get tired from standing tiptoe.

A challenge had been surmounted. But more than that. All the animals of the jungle, forest, field and water, each with their distinct advantages and disadvantages, began to build things to facilitate their friendships. They wanted to improve their friendships, not abandon them. One enterprising pride of lions, for example, built large swimming pools so that they could hang out with their friends the dolphins. The dolphins swam alongside the lions while they lay on rafts!

Tiny was now a hero. Based on the wise owl’s words, he came to realize that there are always positive ways for friends to work together so that they can see eye to eye, without causing any of them strain. After all, they are all equally important to life on earth.

Improving friendships would be a blessing!