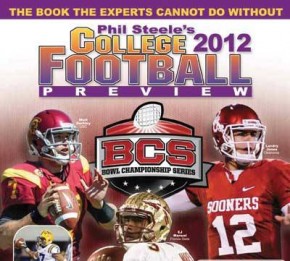 With college football season beginning today, it’s time to check in for our yearly season preview with football expert Phil Steele. CYInterview readers/listeners might recall that Phil puts out the biggest college football and NFL season preview magazines anywhere. No other preview magazines have more information and Mr. Steele is a walking football encyclopedia. He joins me to talk about the teams in contention for the national title, surprise teams to keep an eye on and even how CYInterview regular Mike Leach’s Washington State Cougars [see Leach’s recent CYInterview here] will fair this season among many other topics. You can read the highlights or listen to our CYInterview college football preview below:

This year Phil has predicted that the Florida State Seminoles will win the national title defeating the Oklahoma Sooners in the big game. Though the football information veteran does believe the Seminoles will get to the big game, he does agree with me that either a loss by Florida State or having three undefeated BCS teams at the end of the season would leave the Seminoles out of the national title game based on their schedule:

I think when you look at USC and Oregon they knock each other off because they are two of the top teams in the country. They not only have to play each other on November 3rd, but then they’ll have to play each other again in the PAC 12 title game and that’s why at the end of the year I think the two teams that have the clearest path to being unbeaten at the end of the year are Florida State and Oklahoma and I really feel if both are unbeaten at the end of the year then they’ll be playing for the national title…If you’re looking for a Big Ten team with the potential to get to the national title game it’d be the Wisconsin Badgers due to their schedule.”

One of Phil’s surprise predictions for the 2012 college football season is that he believes the Florida Gators. who finished unranked and at 7-6 last year, will win the SEC East. While there are those who expect the Gator defense to be good this year, there are still questions about Florida’s offense. However, the football expert isn’t worried about Florida’s offense:

“I like the athletic talent of both [Jeff] Driskel and [Jacoby] Brissett and now that they’ve got the reps with the number ones and number twos in the spring and in the fall, I think they’ll be much better quarterbacks this year. They’ve got a strong offensive line in front of them which I rate number 10. I think they’re gonna be able to run the football better. They got three 200 pound backs that can get the ball between the tackles and I don’t think they’ll be a hit and miss offense like they were last year when they were relying on the game breaking ability of [Chris] Rainey and [Jeff] Demps and really couldn’t establish the run inside.

And defensively, wow, if with three returning starters last year Will Muschamp can allow just 300 yards per game, second year of the system, 10 returning starters, three lettermen lost, my number three rated defensive line, number five linebackers, number nine DBS [defensive backs], I feel Florida has a chance to be the number one defense in the SEC and I feel they’re the second best defense in the entire country this year. And when you have a defense like that, you’re gonna win a lot of football games. Then look at the other factor, they’ve got my number one rated special teams in the country… This year Florida’s my surprise pick [to win the SEC East] and I think they’re gonna surprise a lot of people.”

Phil’s number one surprise team is the Texas Longhorns. He thinks their experience on offense this year, combined with their schedule, will make for a great season. Though, if the Longhorns do underperform this season, he believes head coach Mack Brown is on the hot seat for possible replacement.

“The only game I have them an underdog in all year is when they play Oklahoma on October the 13th… If you’re looking for a team that’s got the potential to run the table and get to the national title game that’s not in the top 10, I’m going with the Texas Longhorns this year… I think if Mack Brown goes through another season where he gets six or seven wins this year Texas fans will say, ‘You know what? That national championship was great, but really after three seasons like this, we need to see something else.’ And there might just be a change there.”

Looking at the Fighting Irish of Notre Dame, Phil believes their head coach Brian Kelly could possibly lose his job this year if the Irish underperform with a tougher schedule this year:

With the sanctions and the inability to reach postseason play for coming seasons, Penn State owns a football program obviously beset by challenges. It’s now like a classic sports car with some key parts which have gone bad. [The number one concern at the school should not be their football program anyway. Rather, it should be working to do as much as possible to alleviate the pain brought about by the tragic flaws highlighted over the last year.] Mr. Steele says it’s going to be at least four to five years before this team ends up in the top 25 rankings:

“It’s probably gonna be about five to seven years for them to get back to the top 25. You’re looking at the fact playing with 65 scholarship players in upcoming years. The recruiting classes are gonna suffer because a lack of the postseason. I don’t think they’re gonna be able to bring in the blue chip recruits. And this year looked like a rebuilding year to begin with…This is a rebuilt Penn State team this year, one which I think probably wins four or five this season, only is gonna be at 65 scholarship players. So it’s probably gonna take about five years to start getting back to the level of being a ranked team again.”

When it comes to teams outside of the BCS conferences, he believes the Central Florida Golden Knights will have the best season. It’s still up in the air whether or not UCF will be able to participate in postseason play as they might face a bowl ban this season:

“I feel this year’s squad is deeper, more experienced and stronger than the 2010 squad which knocked off Georgia in the Liberty Bowl and finished number 21 in the country. You look at them defensively, they’re strong in all three areas, special teams are solid. They got my 31 number rated offensive line and look at the running backs, I feel both Brynn Harvey and Latavius Murray are 1000 yard capable running backs, now they add in Storm Johnson my number 20 rated running back who transfers over from Miami of Florida…I think UCF, gonna give Ohio State some problems week two and I think a double digit win season is clearly possible and hopefully they’re bowl eligible and eligible for the CUSA title game as then they can get the biggest increase from losses to wins in one season.”

Finally, Phil Steele gives a preview of his expectation for CYInterview regular Mike Leach’s 2012 Washington State Cougars. He believes they can get to a bowl game:

“The possibility definitely exists. In fact I think you look at the situation he stepped into it’s outstanding…He’s got two quality quarterbacks…With Marquees Wilson the 6’4 183 guy that might come close to Michael Crabtree’s numbers at Texas Tech, I think they will have that explosive offense that you know Mike Leach can do. And Mike Leach at Texas Tech despite not having superior personnel to all of his opponents got them to a bowl game 10 out of 10 years. So that tells you what a great job he did. He’s got seven starters back on the defensive side of the ball. They’re gonna probably be an underdog in seven or eight games this year, but that doesn’t mean that Leach can’t get them to a bowl game and I think that would be great for Washington State which hasn’t been to a bowl game since 2003.”

You can purchase Phil Steele’s football magazines and find all his daily information at his official website www.philsteele.com.

2 Replies to “Time With College Football’s Man of Steel – Magazine Publisher/Football Expert Phil Steele Talks: the Teams, the Possibilities, the Surprises, Who Will Come Out on Top, and CYInterview’s Friend, Coach Mike Leach”