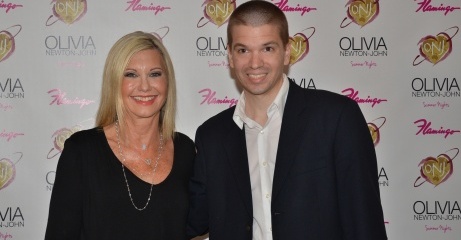 With summer right around the corner, people will travel to Las Vegas from across the world to partake in the many entertainment activities the town has to offer. When it comes to concerts, Olivia Newton-John’s Summer Nights show at the Flamingo Las Vegas Hotel and Casino is a must see. It is a great choice for the entire family.

On May 26th, we attended the singer, actress and philanthropist’s opening night for her latest leg of shows on the Las Vegas Strip. See our photo with Olivia Newton-John after the show above.

Famous for a slew of hits in the 1970s and 1980s, as well as her portrayal of Sandy in the iconic movie Grease, starring alongside John Travolta, Olivia shows us that at age 66, she is not slowing down any time soon. Her Vegas performance will leave you inspired. Her show at the Donnie & Marie Showroom is an over 90 minute non-stop experience. Singing classics like Xanadu, Physical and paying tribute to Grease with You’re The One That I Want and Summer Nights, she gives her fans plenty to enjoy.

During the show, the entertainer takes time to interact with the crowd by asking them where they are from and if they remember certain things from her career. The Grammy winner takes the audience through a biographical journey of her life while singing songs from many of the important periods in her career. In 1992, the performer had a battle with breast cancer, which thankfully she overcame. The Australian mentioned to the crowd how nobody escapes life without going through something. She went onto to sing the song Not Gonna Give Into It as her way of saying how she would never let breast cancer or any other challenge in her life defeat her.

The show debuted in April of 2014 and has many dates in June, July, August and September upcoming. The singer’s show at the Flamingo in Las Vegas is one worth seeing. Olivia Newton John is a performer who gives her crowd their money’s worth and leaves everyone with a feel good entertainment experience to remember.

You can purchase tickets and see all of Olivia Newton-John’s upcoming dates at the Flamingo Las Vegas Hotel and Casino clicking here.

2 Replies to “Time to Get Physical with the One that We Want: Olivia Newtown John’s Summer Nights Show at the Flamingo in Las Vegas a Must See!”