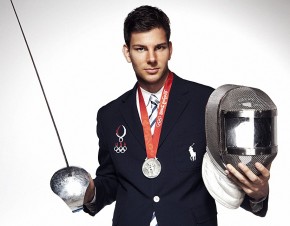 With the opening of the 2012 Olympic Games in London Friday, the world’s nations have begun competing in numerous sports, hoping to bring recognition and glory to their respective homelands. Many eyes will be on American swimmer Michael Phelps as he makes his quest for the most career, Olympic medals in history.

Aside from swimming, gymnastics and basketball – sports that seem to garner the most attention – is another athletic endeavor now getting more attention, thanks to Tim Morehouse.

Mr. Morehouse is the face of fencing in America. From his revealing photo shoot in ESPN The Magazine recently to fencing President Obama on the White House Lawn, the 2008 Olympic silver medalist has been front and center representing the sport of fencing. He says it is growing and he is doing whatever he can to bring attention to it.

Before he headed off to London for the Olympics, Tim gave us his breakdown of the American men’s fencing team’s chance of winning the gold medal for the first time and provided us with an education on the state of fencing in America.

As a kid in school, Mr. Morehouse saw a sign that said, “Join the Fencing Team and You’ll Get Out of Gym.” After finding out what it was, he was hooked on the sport. For those who don’t know what fencing is, it is a sport that uses different bladed weapons. There are three types of weapons used in fencing: the foil, the sabre and the epee. In simpler terms, think sword fighting. The sport is one of four to have been held at every Olympics of the modern era. Tim talks about why he wanted to become the best in America.

“When you’re an Olympian I think you take on that responsibility, especially when you’re in a smaller sport to help promote it…It’s been my honor to get fencing out to the world…In terms of what made me want to be the best, I think it’s always something that even when I was a kid I’d visualize like being at the Olympics or you know when I was watching baseball I’d visualize being on the Yankees. So I’ve always sort of had in mind reaching for the top when I’m doing something and I feel fortunate I’ve had like great coaches and great people around me who’ve helped push me you know to those levels.”

As far as the goal for the 2012 Olympics, the two time individual USA national champion says that the men’s fencing team has never won a gold medal and that’s the goal in London. Mr. Morehouse analyzes the team’s chances.

“I think we’re probably still a little bit of an underdog. It’s still a European sport where they’re full time professionals who have salaries and health care and retirement programs and you know we really are still some of the true amateurs left in the Olympics before the last two games before I sort of embarked on this quest to promote fencing and now I have a number of sponsors. I was working full time and I think that’s pretty typical that most of our team are either students in school or they’re working jobs as well to support themselves. I think we have a tough task you know in front of us, but I think we’re very capable of winning the gold this summer.”

To bring some focus and attention to the sport of fencing, Mr. Morehouse bared all for the ESPN The Magazine body issue. It’s annual issue where both male and female athletes strip down and leave not much left to the imagination. The fencing champion says he did it to bring attention to the sport and show that fencers are real athletes as well.

“I think we’ve never had an athlete from fencing in the ESPN body issue and so I think for fencing to continue to grow and to be considered with the swimmings and the gymnastics, like we want a seat at the table. So for me that was part of it and also I think there is potentially a misconception about how athletic our sport actually is and how we’re really great athletes also. You know obviously we’re wearing these full body uniforms and we’re competing, but we’re just as good athletes as anyone else out there and you know so I just thought it was an opportunity to show like you know how muscular and how physical we are as well.”

Recently, there was some controversy over the Olympic uniforms being worn this year by team USA because they were made in China. Mr. Morehouse was actually in the middle of this controversy as he and another Olympian showed off the outfits on The Today Show. Mr. Morehouse comments on the controversy:

“I was sort of right in the middle of the controversy. I know they’ve now said that for the 2014 winter games they’ll be made in the U.S. and you know I think on the athlete’s side our focus right now is just to try to go represent our country the best we can at the games and there’s always controversies that come up you know with the Olympics and you know I think on the athlete end we just try to like, we’ve been training for four years to try to go to the games to represent our country proudly and that’s really where our focus is.”

Regardless of what happens at the Olympics, Mr. Morehouse will promote the sport of fencing as hard as he can. Back in 2009, Mr. Morehouse had a famous photo of a mock duel with President Obama on the White House Lawn, while America was making its push to host the 2016 Olympics in Chicago. Mr. Morehouse tells his story of fencing with the Commander-in-Chief.

“That was one of those surreal moments. We were promoting the Chicago 2016 Olympic Games and there were a number of athletes there in sports and for whatever reason President Obama came over and was really interested in fencing. You know he spent about 15 minutes with myself and one of my teammates just learning about the sport and we dueled around a little bit and it was a lot of fun.”

One Reply to “Tim Morehouse: The Face – and Body – of American Fencing on Point in this CYInterview: Talks the London Olympics, Fencing and its Future, Dueling with the President, Stripping Down for ESPN The Magazine, the Made in China Olympic Uniform Controversy, More”