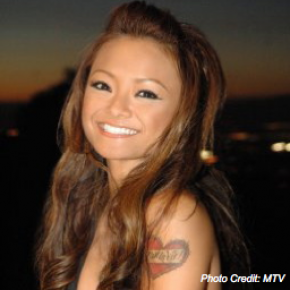 There are so many attractive girls out there, but Tila Tequila is a face you won’t soon forget. The “Madonna of MySpace” comes to MTV in A Shot at Love with Tila Tequila this week when straight men and lesbian women compete for her affection. The all around entertainer also shows her intelligent side that she feels people don’t care to know for now.

Listen to the Tila Tequila CYInterview:

Chris Yandek: How will A Shot at Love be different from any other reality show?

Tila Tequila: “It’s not just a dating show with guys. It’s also with women. They all team up together in the same house and they all sleep in the same bed – the guys and the girls in my house.”

CY: It’s an interesting scenario because you have men and women vying for your attention and they don’t figure out till later you’re bisexual, correct?

TT: “Right! Once they figure that out, the whole game plan changes. You see how different they react. The game plan does change because when the guys are just there they thought oh, dude, we’re competing against each other and that was much easier for them. Once the girls came in it totally knocked them off their chairs. They didn’t know what to do.”

CY: So I am guessing we’re going to see a lot of drama?

TT: “A lot of drama and a lot of wow, this is how guys react. Wow! This is how girls react and competing in challenges. It’s interesting to watch.”

CY: Do people get the wrong idea about you in the sense that we see a sex symbol, but behind all the hot magazine layouts you’re also an intellectual?

TT: “Absolutely! But you know what? I learned that people think what they want to think and that’s kind of actually an advantage when people think that of you. It’s better to have them think that.”

CY: What should we know about you from the other side of the picture that we don’t see?

CY: But if we went over to Tila Tequila’s apartment, would we see surprising books on her bookshelf or would see things like wow I can’t believe she’s into that?

TT: “I actually read a lot of books about the royalty, the Queen of England and whatnot. Philippa Gregory is my favorite author. When you try to put these things out there, people aren’t interested. They just want to see all this other stuff and it’s like you know what? When the time comes, I’ll put it out there. Right now I give them what they want to see.”

CY: You had to have more than just musical talent and sex appeal to go from being in a gang to having a hit number one song on Itunes and your own TV show.

CY: Is the show finished and did you find someone special?

TT: “I just got done wrapping the show and I did find someone for me.”

CY: Is this something that will be long lasting, or is this day by day?

TT: “It’s definitely not what I expected when I was on the show. Before I started shooting, I thought it was just going to be this crazy show that’s partying. Once you get involved it’s pretty deep, especially with all these people. You’re opening up doors with families, lesbians, and being around the guys mixed with the girls. It’s very emotional. I didn’t think I would cry but I did.”

CY: The Christian Post came after you regarding the show and you responded with a very personal blog about how churches are bashing the gay community. Why do you feel it is still hard for certain groups or individuals to accept everyone for what they are sexually and personally?

TT: “I think this show is definitely important right now and I am glad that I did it because it’s going to prove to other people who are close minded about this subject that we are all people with feelings. At the end of the day we all want to find love and shouldn’t be bashed on it.”

CY: So what is the message you’re really hoping to get across then?

TT: “People don’t like to talk about people being gay or lesbian. They always try to hush…hush it. This show really put it out there and you’ll actually see that people shouldn’t be judged. These people come from good families and they do a lot for this world. One of the lesbian girls – her parents adopt a lot of disabled children and she’s really involved in that. You just go through a lot of stuff. People called the police for us walking around the beach being lesbian. It’s horrible what we have to go through.”

CY: Would you say Ellen DeGeneres and Rosie O’Donnell were role models for you in some way?

TT: “Absolutely, because they are strong women. They speak their minds and it shows people like we’re just people. Just because you’re one way or another doesn’t mean you’re horrible people.”

CY: What men and women in Hollywood would you like vying for your attention?

TT: “In Hollywood? How about not in Hollywood? A guy in Hollywood – I would say Leonardo Dicaprio. He’s very talented, but also very intelligent. He cares about world issues and stuff. As far as female, we need a lot more female role models because I see a lot of young girls out there. I haven’t been thinking about those girls very much, but I definitely look up to Angelina Jolie. Before she got married and had kids, she’s definitely my sex icon.”

CY: You’ve been called the “Madonna of MySpace”. What traits do you feel you have of hers?

TT: “Well, I did everything myself. Madonna going back in time, she did everything her own way without trying to follow the rules. She started new trends and we are very similar in that aspect.”

CY: You’re definitely an intelligent human being that really does care about things and hopes to set some examples and hopefully your TV show will make people not ashamed of what they are.

TT: “At first before I did the show I was kind of nervous about it. But now that I am done and know what went down, I am very excited for the show to air. It’s a definite learning experience and I am happy to be the one to put it out there.”

CY: Is there sympathy from you for the likes of Lindsay Lohan and Britney Spears for what they’re going through?

CY: Finally, why should we watch this TV show?

TT: “Because there is no other TV show of its kind out there right now and I am on there. All the guys and girls sleep in one bedroom together for forty days. When you watch them, it’s very interesting to see what happens and how they react together.”

A Shot at Love with Tila Tequila debuts October 9th at 10:00 PM on MTV. You can find more information about the show at http://www.mtv.com/ontv/dyn/tila_tequila/series.jhtml