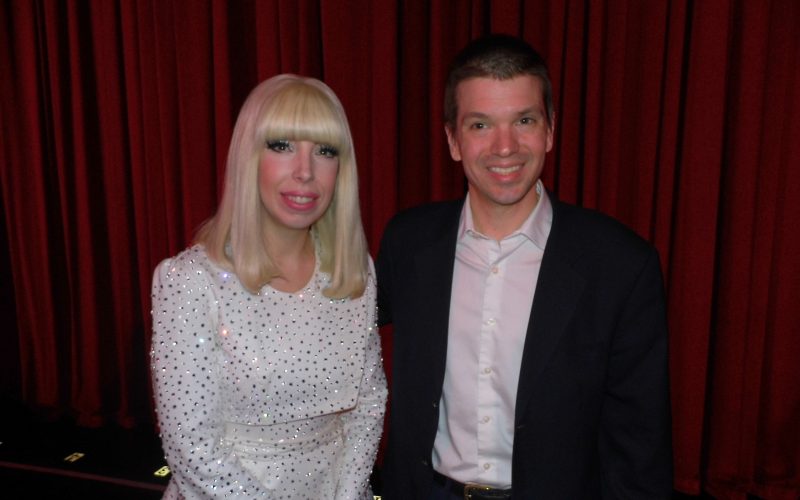 About a decade ago, Tierney Allen was working at Fred Segal when she met actress and past CYInterview guest Kate Beckinsale [see here]. The Underworld star told Tierney she could make a career of impersonating Lady Gaga. Now, Ms. Allen is part of the longest running show on the Las Vegas Strip, Legends in Concert.

The venerable show is now at the Tropicana Hotel and Casino and pays tribute to some of music’s biggest stars past and present. The show has been around for more than 35 years. Having already had a background in music and performance went a long way in helping Tierney’s impressive impersonation of Lady Gaga. See our photo with her as Lady Gaga above.

Speaking to us after a performance this past Saturday at the Tropicana Hotel and Casino, Tierney Allen admits she did not even know who Lady Gaga was, after Kate Beckinsale told her it could be a career move:

“Almost 10 years ago she was one of my customers at Fred Segal in Santa Monica and she just said, ‘Tierney, you look just like Lady Gaga. You should make a job doing that.’ And I didn’t know who Lady Gaga was. So I got to look it up and I was like, ‘Wow! This chick is cool.’ So I had already been singing and dancing my whole life. So I kind of was able to just fall into it and it’s just been the best thing ever, ever since.”

Early on in her Lady Gaga impersonating career, Ms. Allen would go down to places like the Fremont Street Experience to see what kind of reaction she would get. Today, she told us that she can no longer go out dressed up as Lady Gaga, due to the attention she receives. At the MGM Grand Hotel and Casino in Las Vegas about seven years ago, she says she was at a bar and it led to a mob of people around her. Even security thought she was Lady Gaga. After believing she was not the Bad Romance singer, they helped escort her out of the MGM Grand to safety telling us:

“The whole security helps me get out and goes underground and gets me to my little Honda Civic.”

Though she says she has not yet met Lady Gaga, Tierney says she has received some comments from the mega star’s hairstylist and that some of her dancers know of her work. If she could tell Lady Gaga one thing, it would be this:

“I would tell her thank you so much. Not just for giving me this life, but sharing, not being the usual drug addict, crazy pop star. She is so meticulous with what she’s done with her career, with her writing, the way she lives her life and shares a good message. She is somebody that we can all look up to.”

You can learn more about Tierney Allen and her life as a Lady Gaga tribute artist by listening to this entire CYInterview below:

Check out Tierney Allen at her official website clicking here.

You can find Tierney Allen on Instagram clicking here.

3 Replies to “Tierney Allen as Lady Gaga in Legends in Concert at the Tropicana Hotel and Casino is a Compelling, Fun Tribute; Ms. Allen Talks about Her Kate Beckinsale Inspired Start, More”