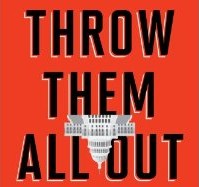 Featured, recently, on CBS’s 60 Minutes, in a segment about insider trading by members of Congress, Peter Schweizer, of the Hoover Institute Stanford University, labels the behavior of America’s public officials crony capitalism. In his new book, Throw Them All Out, Mr. Schweizer lays out many examples of how politicians and their friends have benefited from taxpayer money.

Peter Schweizer joined us, on CYInterview, to discuss what it will take to clean up Congress. Featured columnist Jay Bildstein joins me for this 40 minute plus conversation. You can listen to the conversation in its entirety or read the highlights below:

Trading stocks on insider information is a crime in the United States, but not for members of Congress. Currently, a bill is being proposed in Congress called The Stock Act. This piece of potential legislation, coming on the heels of the 60 Minutes expose, now has over 230 co-sponsors. The bill would make it a federal crime for members of Congress to trade stocks on insider information. Mr. Schweizer says The Stock Act is a move in the right direction, but it’s not enough.

“I think The Stock Act is a move in the right direction, but it doesn’t deal with everything comprehensively. What the law basically does is it says that it would be a federal crime to trade on congressional inside information. I think that’s good, but there are limitations to it and there are other methods that they use to enrich themselves that are not covered by the act. So I think it’s great that there’s movement, but we don’t want to create the illusion that this Stock Act fixes or solves the problem.”

Aside from The Stock Act, Schweizer points out two things he believes can fix the problems in Washington:

“I think we need number one, mandatory blind trusts. I think you know, especially if you have assets over say $100,000, every member of Congress and Senator should have their assets in a blind trust. A lot of people assume they already do, but I would say less than 10 percent of them actually do. I think that’s necessary. I think number two, we need to have a very immediate disclosure of stock trades. Right now, they report their transactions once a year.

That means you can hear about a transaction 15-16 months after it took place…I think if you had within two or three business days disclosures of stock trades, we would then know for example if somebody is writing the defense budget and at the same time trading defense stocks ‘cause we would have that near immediate disclosure.”

When it comes to crony capitalism leading to America’s public officials getting richer while in office, Mr. Schweizer says it has gotten a lot worse in recent years.

“I do think it’s gotten a lot worse in recent years and part of that is simply just ‘cause there’s so many more opportunities. Set aside for a second any kind of partisan debate about the financial bailout or about health care, the health care legislation. The bottom line is that government has gotten larger and has become more involved in the national economy and that creates opportunities that the permanent political class, as I can call them, people from both political parties, to maximize their leverage and maximize their profits. So I think the opportunities are a lot greater than they were 100 years ago…A couple of lines in a financial reform bill can literally move the stock valuations of banks in a major way.”

One of the reasons why such behavior is occurring is that major media outlets have not been holding public officials accountable for their behavior. An exception is CBS’s venerable news magazine, 60 Minutes – which featured two pieces on congressional corruption, first covering Jack Abramoff, who we recently spoke with [see here], and then with Peter Schweizer – has done excellent work in spotlighting what goes on in Congress, yet it appears other well known offerings are lagging in this regard.

Peter explains why he believes the media has dropped the ball:

Mr. Schweizer, who is The Hoover Institute’s William J. Casey Fellow believes that complete transparency when it comes to the actions of America’s politicians, will lead the public to a better decision making process on voting politicians out of or into office.

“I firmly believe that the American people if they’re given the access to the information, if we have greater transparency, they will vote based on these issues and they will let their representatives know that they’re gonna vote on these issues. That’s how I think at the end of the day, what matters because as much as you know most members are enriching themselves and doing things, they will give that up if they believe they’re going to lose their job as a result of what they’re doing.”

“I think there’s a lot that they have in common. I think that their concerns about the fairness or unfairness in the marketplace. The fact that crony insiders get special deals I think is something that unifies them…I’m concerned about the people who get rich through government contracts, special set asides and legislation, government grants, government back loans who milk the system and enrich themselves. Those are the one percent I think we’re all concerned about and we all ought to be focusing on.”

When it comes to government bailouts of financial institutions like Goldman Sachs, Schweizer believes we cannot continue down the same road.

So we have conditioned them through continued government bailouts to believe that we will always bail them out. And they’re gonna return to the same risky behavior that they were doing before and indeed they have already. I think the answer is simply to say, you are cut off and if you fail or have trouble, we are gonna protect surrounding banks who might face collateral damage based on what you’ve done, but we will not bail you out, period. That’s the way we need to do it.”

“What’s very clear is that this is a trading operation that was engaged in highly risky trades related to the European financial crisis and somebody like Jon Corzine and the traders that were with him doing that; there’s no reason at all we should be bailing them out. And people that were trusting that company and Corzine to make responsible financial decisions, no we shouldn’t be bailing them out either. The only way that you get a free market to work the way it’s supposed to is that people get to secure their profits, but they also have to deal with their losses. And what I think we have in America today is a very dangerous circumstance where we basically have socialism for the very wealthy.”

In closing, Peter, agreed that to achieve transformative change, Americans must hold their elected officials accountable. Grass roots movements, for example, must educate people and get them involved. He believes it is going to take pressure from outside of Washington, as the system is not going to reform itself.

You can purchase a copy and find more information about Peter Schweizer’s Throw Them All Out here.

3 Replies to “Throw Them All Out! Peter Schweizer Speaks With Us about His Book, Congressional Insider Trading, Crony Capitalism and Cleaning Up the Rats’ Nest of Self-Interest that is Washington – Compelling”