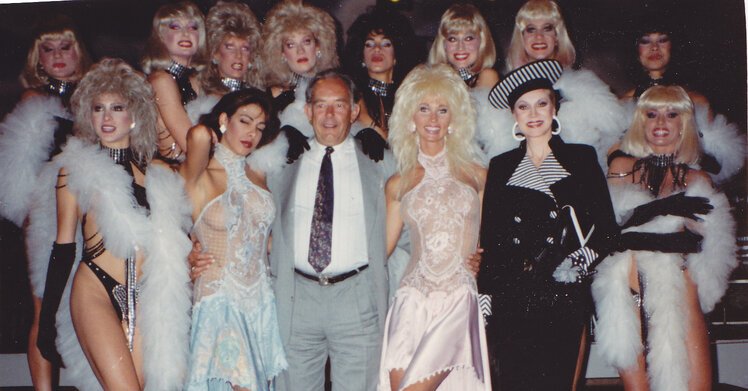 Today, we remember Robin Leach, best known for his 1980s/1990s television program Lifestyles of the Rich and Famous. The enthusiastic television host was a columnist for the Las Vegas Review Journal, prior to his death in 2018. Today is the third anniversary of his passing. Mr. Leach was a past CYInterview guest [see here and here].

In 2018, the host of Crazy Girls, past CYInterview guest Dani Elizabeth [see here and see here] shared that Robin was a big fan of their long running Las Vegas burlesque show. As far back as 1989, Mr. Leach visited Crazy Girls. You can see him in the photograph above, with the cast of Crazy Girls, along with Phyllis McQuire of The McQuire Sisters.

In 2016, we met Robin Leach at Lavo Italian Restaurant at The Venetian Resort Las Vegas. You can see our photo with him below.

Robin Leach will never be forgotten. He did many good things for the Las Vegas community. We extend him champagne wishes and caviar dreams in his home in the great beyond.