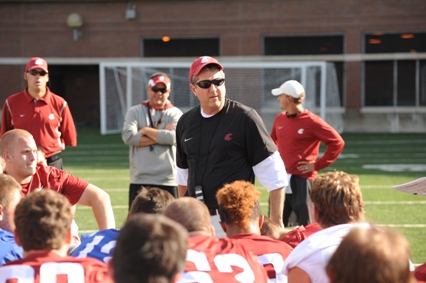 With certain sports and entertainment stories coming into national focus, who better to speak with than CYInterview regular, the always insightful Coach Mike Leach. The Washington State head football coach took time out of his busy schedule on the recruiting trail to provide some interesting analysis on Lance Armstrong, Manti Te’o and the upcoming Academy Awards, among other things.

You can read the highlights or listen to the coach’s latest CYInterview below:

As mentioned, Coach Leach is currently out on the recruiting trail, for a three week period, fielding the latest group of young men who will come play for the Washington State Cougars. Reflecting on the recruiting process, the 2008 Big 12 College Football Coach of the Year said this:

“You go to a lot of different places. You see a lot of different homes, I mean anything from houses that have a dirt floor with a rug over it to mansions. Generally most of them are somewhere in between those two and different locations in the country and everybody brings a different kind of personality background to the thing and it’s always interesting. …

The points I make are that I think people should come to Washington State for the same reasons I did which would be first of all, it’s a true college town. As a college student you step out your door and you see it’s all fellow college students, not, you know you have the rest of your life to live in a city or town, but in our case it’s truly a college town where everything’s within a couple blocks and it’s all students. And what’s exciting about that is you know everybody’s going through the same thing you are. You’re kind of growing, maturing, expanding your mind and there’s a special chemistry to a college town I thinks unique.”

During Lance Armstrong’s recent interview with Oprah, the cyclist admitted to using performance enhancing drugs, at different times, when competing in the Tour De France. Mike provides an interesting perspective on Lance and the state of the sport of cycling:

“I think all of America took a lot of pride in his accomplishments and to me it’s still something clouded. I mean, as easy as it is to make Lance Armstrong a hero, you know people are very quick to just as easily make him a villain and I think that you know and I don’t know the facts on this at all, but you know odds are somewhere in the middle is the truth. I think that if you have a sport where cheating’s commonplace if it is in cycling and everybody else is doing it, well, then you have Lance who, you know, I mean if everybody’s doing it then Lance is essentially guilty of cheating better than the other people that he beat in the same sport in.

I think obviously there’s a problem with testing, legislating, enforcing, you know, and I don’t know the difficulties that exist with that, I’m sure that they’re huge. And, but if it’s commonplace to the point where everybody’s doing it, it doesn’t make him innocent, but you know it mitigates it on some level, I think. … In the end, hopefully it cleans up cycling and it’s something that, because it’s a worldwide sport that the whole world can be proud of.”

Whatever you believe about the story of Notre Dame Football player Manti Te’o’s fake girlfriend, Coach Leach has an interesting perspective providing for a moment of sociocultural reflection:

“Part of me wonders and I’m sure this is probably an oversimplification is, if isn’t the ultimate, the ultimate glorified year 2013 prank phone call. You know, I mean, use to be you’d get prank phone calls, you picked up the phone, ‘Hello. Is your refrigerator running? Well, you better go catch it.’ Well, nowadays it’s kind of extended to computers and the complexity of that which, you know, once the toothpaste gets out of the tube, it’s tough to get it back in. …

You’ve gotta wonder how fulfilling a relationship is with a girlfriend that doesn’t exist and that you’ve never seen other than, you know, then a bunch of computer strokes on a computer and you know I’m sure there’s some very attractive and wholesome girls that would’ve been more than interested to get to know Manti Te’o.”

When it comes to the Oscar discussion, Mike has seen a set of the movies nominated for Best Picture this year and provides the kind of insightful and entertaining movie analysis you just won’t find anywhere else.

Those who know Mike Leach are aware he has a true love of movies. Of the movies nominated for Best Picture at the Academy Awards, he’s seen Argo, Lincoln, Life of Pi and Zero Dark Thirty. Here are some of his Oscar movie thoughts:

“Les Miserables I heard was fantastic. I haven’t seen it. I’m not a big musical guy, but despite that, several other people I’ve talked to say that is transcends all that and it’s more than worth seeing it. I saw the Life of Pi. It was very good. My kids in particular loved it. I liked it quite a bit. … I saw Lincoln. I thought it was really good. It centered around the 13th Amendment. I liked it a lot. I think that it’s gonna be very, very, very difficult under any circumstances for Daniel Day-Lewis to not get best actor for Lincoln. … My gut feeling is either that [Lincoln] or Les Miserables will be Best Picture, just the way that, handicapping it the way that it appears to me the Academy usually votes.”

As always, we thank Coach Leach for his time and valuable insights.