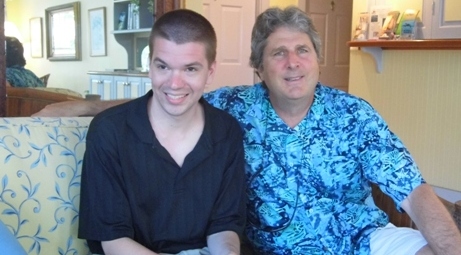 Last year, we went down to Key West to see Washington State football head coach and CYInterview regular Mike Leach [see here]. Recently we visited Key West again to catch up with the coach. Coach Leach recently traveled to New Zealand, is finishing a book on Apache warrior Geronimo and, of course, is looking forward to the upcoming college football season season. Those, among other things, gave us a wide variety of topics to speak about. Conversing with the coach is always interesting, insightful and entertaining. Last but not least, it was a pleasure to meet his lovely wife Sharon. You can see a photo of us, all together, in the piece.

You can read the highlights and listen to the entire CYInterview from our latest round with Mike Leach below:

Speaking about his recent trip to New Zealand, Coach had this to say about the land of the Kiwis:

“It was really good. Well, New Zealand’s a place that everybody’s heard about but doesn’t fully know exists, me included and you know the amazing thing is how isolated it is. New Zealand’s actually 900 miles from Australia and I always thought it was like right next door, two main islands there. Went hunting on both islands and then got the opportunity to watch the New Zealand rugby team, the All Blacks as they prepared for France and met several of the coaches and some of the players. So that was really exciting too. And then, but incredible country, it does have a middle earth quality like you might expect and really pretty. And then, of course, the plants and wildlife are very unique too, to any other place.”

The NY Times Bestselling author of Swing Your Sword is now working on a book with fellow Washington State employee, Professor Buddy Levy. The book is about the warrior chief Geronimo, who was a leader during the Apache Wars against the United States and Mexico. Mike had this to say about the upcoming book:

“The book on Geronimo is full steam ahead. We’re 14 chapters in and gonna review 15 and 16 in the next day and so I’m on the phone with Buddy Levy and you know as we talk about our thoughts and strategies on the book and you know it’s been an exciting project and I think the thing that we’re most excited about besides just the facts, the story, point ‘A’ to point ‘B’ is the details of how he got there and I would like to think that our book offers more details than the kind of how he went about things than any other that I’ve read. So we’re excited about that. …

It was a funny coincidence. I wrote the book Swing Your Sword and a guy that was involved with the book Swing Your Sword had worked with Buddy before and said, ‘You know there’s a guy that’s written some books and would be interested in doing a book with you.’ … He wrote a book on Davey Crockett that he sent me and I read, and he’s also written one on Cortes that’s pretty good. … We started working on the book and it’s gone good. Buddy also, he’s on History [TV channel] Decoded. He’s one of the academics on History Decoded.”

The head coach provides us an assessment on where his Washington State Cougars are as we head toward college football season next month. He tells us improvements are in store for his second season at the Pac 12 school:

“We’re having a really good offseason. Our young guys are on campus working really hard and you know and so, and I think our team’s a lot tighter team than they were, but you know we’re battling everything everybody else is to get bigger, stronger, faster and older. But I think you know we’ve improved at that, we had a really good spring. So thought things went well. … I think last year’s the worst will ever be. Of course, we started 17 freshmen which is unheard of. … We led the Pac 12 in passing, but we can certainly get better at it. And I think just overall we gotta get better at everything. There’s, I didn’t see anything from last year that doesn’t need improvement. … I think the commitment of our players is significantly higher.”

The 2013 college football season will kickoff for Washington State when they travel to play the Auburn Tigers and their first year head coach Gus Malzahn. Both teams were 3-9 last year and will be looking for a win to begin the season on a positive note. Mike gives his thoughts on the game:

“We’re looking forward to the game. Auburn’s great tradition and all those things and Coach Malzahn does a good job. And of course Auburn’s had a lot of back to back top recruiting classes, that type of thing. And so you know they really have some good personnel and they had their struggles last year, but you know not sure how they’ll come through it. But they’re one of the more talented teams we’ll play this year.”

Recently, Coach took to his Twitter account to ask his followers what their three favorite films are. After all the tweets were read, he listed what he considers the 50 best movies of all time. Being the movie buff he is, Mike tells us what inspired him to do it:

“Just randomly on Twitter one night, just said, ‘Three best.’ I asked folks to give their three best films. And part of that was to see if there was something that would surface that you know I hadn’t seen that I’d be interested in seeing and I don’t really recall too many of those. And then so people start calling for my three best films and then as I started to think about it and you know over the next week or whatever I’d jot down one or two as I thought about it, but then I discovered that I, you know, I couldn’t successfully trim it down to three. And so when I couldn’t trim it down to three, I decided, but I could do 50 in no particular order. And so then since I had 50, I figured I’d do an installment of 10 each day. So that’s been kind of fun.

And then when I got through the 50, others would surface that, you know, must go on the list, but I already made the list and didn’t know what to cut. So then I threw 15 more out there today that I said that in hindsight occurred to me that probably should’ve been on the list or could’ve been on the list although I don’t know what I would’ve cut and so threw out those 15. And that’s pretty well done at this point. But everybody seemed to enjoy it.”

The four sports films that made the list were Rocky, Friday Night Lights, 42 and Bull Durham. Mike tells us why the best sports movies are boxing and baseball stories:

“The best sports films or the easiest things to make sports films on I think are baseball and boxing. And the reason is ‘cause there’s stops in the action, you know you can zero in on somebody’s face where you can recognize whose face it is you’re looking at. So in other words, I think it’s a lot easier to tell a story with baseball and boxing. And where football, what’s difficult there and part of what really impresses me about Friday Night Lights is I thought they were able to do it. And the hard thing about football is on any play, there’s 22 people going 22 different directions and those numbers are just flashes and blurs and then their faces are covered up with helmets. So it’s hard to you know exhibit the emotion and the thoughts you know that you pick up from looking at someone’s face.”

The 2012 college football season was the first time Mike Leach did not take his team to a bowl game as a head coach. He believes that this season, Washington State will go to a bowl for the first time in 10 years:

“I think so. I mean, of course, you know I’ve been to bowl games nonstop until last year. So I’m pretty conditioned to expect it. I thought we would last year, but and, you know, we were close enough and in enough games we could’ve last year if we just finished the deal, but I do think we will this year.”

One Reply to “The Pirate Sword Swinger of the Great Northwest, Washington State Cougars’ Mike Leach – Coach, Scholar and Gentleman – Sits Down with Us in Key West and Talks Football, Movies, Geronimo and More”