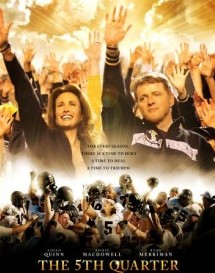 For over two and a half decades, actor Aidan Quinn has been demonstrating his acting abilities in movies, television and on stage. Many will recall his work in Michael Collins and Desperately Seeking Susan. Recently, he had his first number one box office movie in 18 years with Unknown. Unknown is still in theaters. Quinn’s latest role in the 5th Quarter will be out this Friday in theaters in the southern part of the U.S. It’s based on a true story about a player on the Wake Forest football team paying tribute his 15 year old younger brother, an athlete in his own right, who dies tragically.

Listen to the entire CYInterview with Aidan Quinn:

In the last month, a sports related tragedy occurred when 16 year old high school basketball player Wes Leonard died after hitting the game winning shot for his team. I asked Quinn what he thought about the death of Wes Leonard and young people dying well before their time.

“You can’t imagine what the family and friends and teammates and school must be going through. Just today in Rockland County, where I’m right now, there was a 20 year old going too fast and reckless driving, who died. So these kind of things are unfortunately happening way too often.”

5th Quarter focuses on the Abbate family of Marietta, Georgia coping with the death of their 15 year old son Luke who passes away in a car accident. Luke’s older brother Jon played on the Wake Forest Football team and dedicated the season after he died to him. In 2006, the Demon Deacons were predicted to finish last in the ACC. They ended up winning the ACC Championship and got a birth in the Orange Bowl. Aidan shares his reflections on the movie.

“I think this story is particularly about this family and what happened to them. It’s very true to life and it has a tremendous amount of heartwarming elements. The five organs, he was an organ donor, he saved many people’s lives because of the organ donors program. His brother then took his number, his high school number was five and he played at Wake Forest and Wake Forest which was slated to be a horrible team that year went to the championship and went 11-2 and had their best year ever and Jim Grobe won coach of the year. There were so many extraordinary things that happened around this story, but it’s really a story of a family, how a family pays tribute to their loved one and tries to get through this tragedy the best way possible.”

The Abbate family requested to be on set during the shooting of the film. Quinn says it was nerve wracking in the beginning, but everything worked out fine.

“It’s a little nerve wracking to think about it in the beginning, but once I met them and I met them before we started filming and got to spend some time with them and talk with them, go over some scenes even with certain details, I had to ask about certain things, they are so bighearted and loving and supporting a family. You certainly feel a responsibility to really get it right.”

As far as favorite roles go, Aidan says nothing is better than his stage performance as Hamlet. He believes it might be the best role written for an actor. As far as movies go, he says there are many, but he is particularly fond of his role in This Is My Father. Quinn and his siblings worked on that project together.

“Well, certainly you can’t do better than Hamlet. That was by far the favorite role I ever had and I think it could possibly be the best written role for an actor. As far as films, there’s so many of them. This is My Father, a film that my younger brother Paul wrote and directed. My older brother shot as cinematographer and my younger sister has a small part in it was certainly way up there. That was a special experience. We got to produce that as well…There’s so many roles that I’ve been lucky to play and that I have a fondness for, but those ones stick out of my mind right now.”

After Aidan played Paul McCartney in the VH1 TV film Two of Us, he had a random encounter with the music legend while he was on vacation. He said the Beatle loved his portrayal in the TV movie.

“I had a rather bizarre meeting of him shortly after we finished making the film and where we were both at a vacation spot and on the beach in vacation huts right next to each other on the beach. We got to hang out and break bread and go to dinners together. The best part of that was in the end, he saw the film and he really liked the portrayal. So, yeah, he’s a great guy. Obviously a phenomenal guy and that was one of those bizarre coincidences.”

In 1985, Quinn worked opposite Rosana Arquette in Desperately Seeking Susan. Then up and comer Madonna also had a role in the film. Though Aidan didn’t have any scenes with the Material Girl, he recalls his impressions of her.

“All my scenes were with Rosanna Arquette. I think we were actually only on screen together, which she was in the background of the ultimate scene at the end. I don’t think we even had an interaction. My impression of her was that she had a lot of spunk and a lot of talent and a lot of moxie.”

With the world mourning the death of Hollywood legend Elizabeth Taylor, I asked Aidan if he had anything he could relate about her. He reveals he came close to meeting her about three months ago, in Beverly Hills. But, Quinn said the moment just never came for him to introduce himself to the legend.

“Well, you know, it’s funny, about three months ago, I was at a place in Beverly Hills and she was just at the next table with her whole big group of people. I thought, God, I’d love to just say hello and I thought I don’t want to bother her. There’s a lot of people around her. I remember thinking, if I do get a chance, I just want to just give her a nod and particularly not just for her great work as an actress and legendary work, but for her work for AIDS and I always wanted to thank her for that. The moment never quite – and I remember I went away, I went to the restroom or something and then I came back and they that gotten up and I was like, oh, I didn’t get to just thank her and that was a few months ago.”

Many of Aidan’s fans believe he hasn’t gotten the acting recognition or acclaim that he deserves. This is his message to fans about that:

“Well, I appreciate their sentiments and they can pass that on to the powers that be that do the casting. (Laughs) That would be nice.”

The 5th Quarter is out in theaters this Friday March 25th. You can find more information about the movie at http://the5thquartermovie.com/