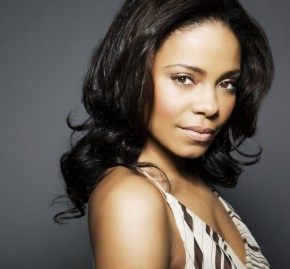 Monday evening was the world premiere, in New York City, of the off-Broadway play, By the Way, Meet Vera Stark. The play is written by Pulitzer Prize winner Lynn Nottage, who won the Pulitzer two years ago for Ruined. Tuesday afternoon, CYInterview welcomed back Sanaa Lathan, who stars in the production as Vera Stark. It’s been over two and a half years since our first interview with Ms. Lathan, which took place in 2008 (see interview here).

A play’s opening night is exciting for any performer, especially for someone in a lead role like Ms. Lathan. Sanaa, by the way, is a Yale School of Drama graduate. Hopefully, Vera Stark will enjoy a strong run. This is what the lovely Ms. Lathan thought of opening night:

“Last night, it felt good because we all have been doing it for a while. It really was kind of a celebration of all of the hard work we have been putting into it. I’m just so thrilled that people are really responding so well to the play. We’ve been selling out every night. It’s kind of been a charmed experience for me…I play a 28-year-old in the 1930s, so it’s the whole period piece. Then second half, I fast forward to the 1970s where I’m 68. I’m very weathered and may have a drinking problem. So it’s definitely a stretch. I’ve gotten to really kind of step outside of my comfort zone and do some more character work, which I love…When I did a lot of plays earlier in drama school, I really did a lot of character work and loved character work. So it’s kind of fun to be able to do it now.”

Over the years, Sanaa has performed in a variety of cinematic roles, with her characters being involved in interracial relationships with all kinds of men.By the Way, Meet Vera Stark, is a stage production, but there is a similar theme present in it. The character of Vera is a dating a white guy who’s a Hollywood star.

In movie roles over the years, including Something New and Wonderful World and in her recurring role during one season on the TV show Nip Tuck, Ms. Lathan has been one of Hollywood’s black actresses who has found herself in onscreen, romantic relationships with men of all racial backgrounds. She believes it’s time for everyone to accept that people should be able to date whomever they want.

“I think that at this point, 21st century, it’s like time to get on with it. I think there’s nothing wrong with dating interracially. There’s nothing wrong with dating your same gender. I think that at this point people should be able to love who they love, love is a blessing. I feel fortunate that I’ve gotten to play characters who happen to love. They love black men. I play a character that falls in love with a Vietnamese man. I played a lesbian character. I played a character that loved a white man. So, I just think that it shouldn’t be an issue anymore. It’s sad that it still is an issue to me. You know what I mean?”

By the way, Meet Vera Stark examines 1930s stereotypes. Looking at Hollywood today, Sanaa believes stereotyped roles aren’t as common as in the past, but she’d like to see more role opportunities in general.

“There is still a little bit of that going on. I think that we’ve made a lot of progress. I think probably more the issue is the lack of roles than stereotypes. I would just like films to reflect the world that we live in and I don’t think it quite does that yet and hopefully it will.”

I was sent a DVD screener, in 2010, of Sanaa Lathan’s performance as a Senegalese woman, alongside Matthew Broderick, in Wonderful World. It was one of the most under the radar films in recent memory. Sanaa recalls she only had three weeks to get her accent down. The role might arguably be the best of her movie career. To perfect her accent, she worked with Robert Easton who’s worked with some of the biggest names in Hollywood.

“I had to get that accent in like three weeks [Laughs]. It was fun. It was very quick. It was like a three week shoot. The accent, I worked with Robert [Easton]. He’s one of the foremost accent coaches in history. He did Al Pacino for Scarface. He did Forest Whitaker for The Last King of Scotland. He’s just done so many people and he was wonderful.”

With her ongoing voiceover role as Donna Tubbs on Fox’s The Cleveland Show, Sanaa shares with us that the work of a voice performer, for an animated character, can be done anywhere in the world:

“I love the fact that I can be in New York and go in, be wherever or I can be in L.A. and do it. I worked in London last year and I did it. It’s like, you can be anywhere in the world and still do this cartoon.”

In April, Notre Dame women’s basketball player Skylar Diggins along with her teammates, took down the defending champion Uconn Huskies. Watching Ms. Diggins, I couldn’t help but think she was Sanaa’s character, Monica, in Love & Basketball. For many, that movie is still the ultimate 20 something love story. Looking back at it, Ms. Lathan tells us about the intense basketball training she went through.

“I never had played basketball before and I basically, they auditioned me for about four or five months. So during those four months, after a certain point, I was like, if you guys still want me to be invested in this process, you have to get me a coach. Because it’s like, I don’t know what I’m doing. I just can’t go to the court. So they got me a coach during the audition process, her name was Colleen and she was a coach for the Sparks, the L.A. Sparks and we did real intense basketball training every day. Once I got the role, it even got more intense. It was really important for Gina [Prince-Bythewood], the director that I really look like I really knew how to play because Gina was a basketball player herself.”

Recently, Sanaa completed a role working alongside Oscar winners and A-List stars including Matt Damon, Gwyneth Paltrow, Marion Cotillard, Kate Winslet, Jude Law, Laurence Fishburne and Elliot Gould among others. It was for a movie titled Contagion. IMDB.com notes a release date for October 2011. Sanaa gives us a preview of this star power movie.

“It is basically, big ensemble thriller about a disease, a deadly disease that travels around the world and obviously it travels through all these different characters. I play Laurence Fishburne’s fiancé. He’s the head of a center for disease control and he gets some information early and gives me the information and I do something maybe that I’m not supposed to do with the information. That’s all I can say.”

All performers, particularly those with Hollywood careers, impact the public for a variety of reasons. Based on personal experience, I have seen that Sanaa means a lot to twenty-something African-American women. I asked her if she had any advice or suggestions for the women who closely follow her career. Her response is important for her fans, yet is also something everyone can gain from.

“The first thing that comes to mind is just really, I really believe in developing. If you have a dream, I really believe in doing the work of developing of yourself, getting in. Whether if you’re a singer or you want to be a teacher or you want to be a writer, get in class, study the people who you admire, do the work to make yourself the best that you can be. I think that a lot of people think that things come easy in this life and it doesn’t always come easy. I think that the better you can be prepared through preparation and study, the better it will turn out for you.”

With her role as Vera Stark, Sanaa wants her fans to know she couldn’t be happier:

“I am so happy. I am so thrilled. I was just telling my dad this morning, ‘I just feel so happy.’ Because it’s always wonderful. You always have a triumphant feeling when you feel like a project that you’re working on has been received with this much success. This is kind of a big deal for me right now…I’m having a great time doing it [By the Way, Meet Vera Stark] so I couldn’t ask for anything more right now.”

Finally, as Oprah Winfrey finishes up her show on May 25th, I asked Sanaa what she could tell us about her Oprah talk show experience, as a past guest. Ms. Lathan reflects on her experience on the show and sends a message out to Oprah about the future:

“It was thrilling because I’ve been watching Oprah for years and have been very inspired by her many, many times over. So I was thrilled, thrilled to be there. I just remember, it was almost like a dream like experience because like I can’t believe I’m on Oprah, but they treated me so well. I loved all her staff and set. It was really cool being on the set. I would say to her, ‘You’ve accomplished so much and be proud of that and just continue doing what you do whether it’s in cable or radio or whatever you do is gonna be something special and I love you.’ I love Oprah.”

You can find more information about By The Way, Meet Vera Stark at http://www.2st.com.

4 Replies to “The Lovely Ms. Sanaa Lathan: Starring in Vera Stark, Talks about her Career, Sends Wishes to Oprah”