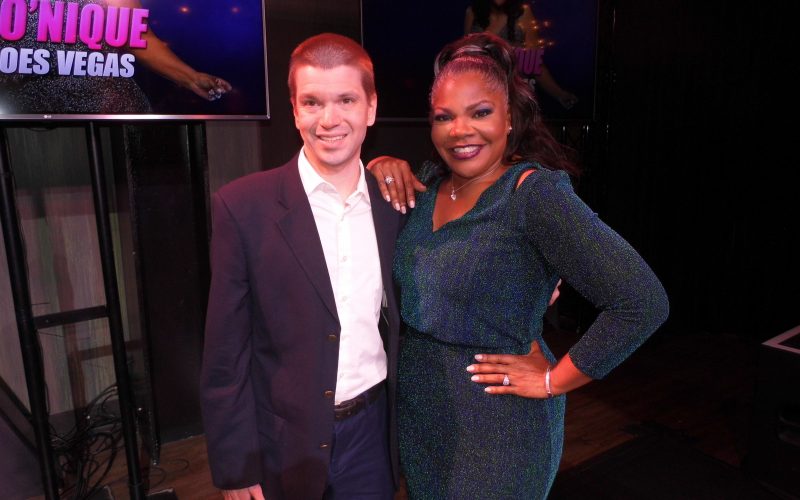 On February 7, a headline appeared online on the Drudge Report saying, “Mo’Nique went from Oscar winner to Hollywood pariah — can she bounce back?” The Drudge Report is reported to be seen by hundreds of millions of people each month. Recently, Mo’Nique has been candid about her frustrations with the business side of show business. There are various layers to her concerns.

48 hours after that Drudge Report headline, we were with Mo’Nique in person at the SLS Las Vegas Hotel and Casino, where the actress currently has a residency at the Sayers Club. Her show is called Mo’Nique Does Vegas. Doing what she has done best for most of her career, the comedian is making audiences laugh. Her Las Vegas show is not for the easily offended. She is also making Las Vegas history as the first black female comedian to have a residency. See our photo with her above at the Sayers Club.

Mo’Nique marches to the beat of her own drum. But one thing that cannot be denied, the people who show up to her show and have followed her career know that it has not always been an easy road for her. But her fans and followers have loyally stood by her, even in this moment of challenge when it might appear that it is Mo’Nique against the rest of the show business world. Oh, and the comedian does not call her supporters fans, she calls them her family.

Since winning the Oscar for Best Supporting Actress at the 2010 Academy Awards, for her role in Precious, Mo’Nique says her career prospects have been more challenging instead of easier. According to her, after deciding not to go on an international press tour for the movie Precious, she was portrayed as difficult. She states that she honored her contract for the movie and that without compensation to go around the world to promote the film, she decided to spend time with her family.

Throughout the last year, she has been vocal about her displeasure with Netflix’s offer for her to do a comedy special, specifically when compared to what other comedians have received. She says she received a $500,000 offer and that there was no room to negotiate with Netflix. That situation led to a segment on The View where she had some differences of opinion with fellow Academy Award winning actress and comedian Whoopi Goldberg. And that is where the story stands at this moment.

For now, Mo’Nique is making people laugh in Las Vegas. Her speaking up about her dissatisfactions with Hollywood will continue and she believes though it may take time for more people to get it, she has faith that her perspective will become more accepted and that could lead to change in the industry.

To get a better understanding of what we have mentioned above, we recommend listening to this almost 40 minute CYInterview with Mo’Nique, below. You can also read some of the highlights below, as well.

Listen to the entire Mo’Nique CYInterview:

On being the first African American female comedian to have a Las Vegas residency – at the Sayers Club, inside the SLS Hotel and Casino – Mo’Nique says this:

“Well, it’s an honor to be the first black female comedian to have a residency on the Las Vegas Strip. To say, am I getting the recognition I deserve, I’ve been in this business now for 30 years. So I don’t know if it’s what I deserve, it’s just what I do. And I’m grateful for the family members that’s been with me for the last 30 years.”

Though there have been recent professional differences, Mo’Nique told us she has no personal issues with Whoopi Goldberg:

When it comes to the $500,000 she was offered for a Netflix special, the comedian says there was no chance to negotiate the offer:

“Netflix never even negotiated. They said $500,000, take it or leave it. So when you’re put in the position where you can’t even negotiate, what is that?”

On whether the Academy Award winner thinks she is making a difference by speaking out about her dissatisfactions with certain facets of Hollywood, she told us this:

“Do I feel like I’m making a difference? I hope that I’m making a difference and every minute has been worth it. And I wouldn’t change not one second of it. I’m not perfect by far Chris. I’m probably one of the most flawed individuals you’ve ever sit across from, however, when I need to apologize, I do. When I don’t, I’m unapologetic. So I go back to that baby that’s not here yet and of course they’ll read our stories as we read the stories of yesterday and when they get to mine, I want them to say, ‘She made us really proud.’”

Back in 1939, actress Hattie McDaniel became the first African American woman to win an Oscar for her role in Gone with the Wind. Though Mo’Nique formally owned the rights to Hattie McDaniel’s life story, but does not anymore, she hopes her story is made into a film one day:

“I hope that that story gets made because it will explain the beginning of Black Hollywood and the treatment that came with it once you received the trophy called an Oscar.”

On why people should come see her at the Sayers Club at the SLS Las Vegas Hotel and Casino, Mo’Nique said this:

“This show is filled with so much love Chris and so much honesty. And for me, it’s very therapeutic, but I’m getting people in the audience saying, ‘I went to church, I went to a therapy session, I went to a comedy show.’ They said, ‘I didn’t expect all that I got.’ So, expect the unexpected when you come to Mo’Nique Does Vegas.”

You can purchase tickets for Mo’Nique’s Las Vegas comedy show at the Sayers Club at the SLS Hotel and Casino clicking here.

One Reply to “The Incomparable Mo’Nique: The Academy Award Winner, Hilariously Irreverent Comedian and Show Business Original Sits With Us and Tells Us Everything We Want to Know”