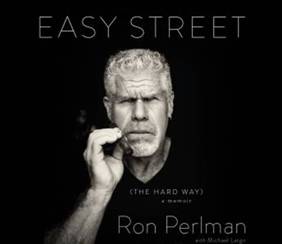 Succeeding in show business calls for the ability to overcome personal doubt, while at the same time dealing with a variety of other adversities. Rarely does a person break through and gain widespread recognition for his artistic endeavors. The people who do make it often have a compelling narrative to share. One such individual is Ron Perlman, a true artist and an A-list actor whose story is as inspirational as it is entertaining.

Mr. Perlman’s body of work is diverse, his talent rich and his performances soulful. He has written a book, Easy Street (The Hard Way), which has been out for a few months now. If you have not yet read it, you are truly missing out.

Many will recall Ron Perlman’s brilliantly played roles in the TV show Sons of Anarchy as Clay Morrow, the 1980s television program Beauty and the Beast as Vincent and as Hell Boy, in the movies Hell Boy and Hell Boy II.

We had the pleasure of speaking with Ron Perlman for over 40 minutes. You can read the highlights and listen to the entire CYInterview below:

In his book Easy Street (The Hard Way): A Memoir, Mr. Perlman opens up about how his father influenced his life before and after his passing. He shared this:

“The book if anything is me chronicling why the good old days really were the good old days and what we’ve lost in the name of progress. And it gets very angry toward the end of it because there are so many aspects of the decencies of a mom and pop kind of world, which he was completely representational of, because he was really a lower middle class guy who probably had more to admire than, you know, the 600 that congregate our Congress and our boardrooms. He was the embodiment of a better time and a better set of values that have been kind of given a backseat to things that are, what I term in the book as, false idols, things we are all wrapped up in trying to achieve these days that take us away from the real golden stuff.”

With Sons of Anarchy, Beauty and The Beast and the Hell Boy franchise as part of his extensive resume, it is fair to say that Ron is a three time acting icon. Reflecting on the successes of his career, he shared this:

“I’m a little bit superstitious, like if I ever stop to think about how great everything is, it will all end. If I just keep moving forward, you know, one of the reasons why I thought [Frank] Sinatra was, processed greatness in some of the more unobvious senses because, you know, everybody chronicles his greatness for the obvious reasons. But when you saw him interviewed, you know, he basically, he was a very complex guy. I mean, he had an arrogance, he understood his gift and his responsibility toward making sure that gift was used properly. But at the same time he always thought of himself as just the vocalist, just the same way as the guy who plays the trumpet is just the brass. …

You know, it’s ultimately beautiful and Sinatra just thought of himself as the vocalist and I never forgot that when I first heard him interviewed and how he explained himself as that. … I’ve always thought of myself as just a guy, like a representational artist who basically changes with every passing opportunity. So, no I don’t think of myself in any kind of iconic way.”

Though many well executed roles comprise his acting curricula vitae, for some, his most recent turn as Clay Morrow – on the popular television show Sons of Anarchy – reflects some of his best work. Offering his reflections on the popular TNT TV show, he said this:

“I always looked at Clay as a hero, as somebody who had a huge responsibility at his feet. You know, the safety and security of a community of a family of blood and that, like the Godfather says, ‘Women and children can make mistakes. Men can’t.’ You know, this was a guy who took that credo really seriously. I am gonna do what I gotta do and I’m never gonna second guess it and I’m never gonna let anybody else second guess it because whether I am right or wrong, I truly believe I am doing the best thing to keep my family secure, safe and prosperous and so that was what I needed to feel in order to play Clay.

Toward the end, I kept running out of abilities to be able to feel that because he got very dark and he got very self centered and I stopped kind of admiring the wiring. And so luckily, at the very, very end I feel that there were a couple of moments of redemption. There was at least an attempt at redemption.”

Speaking of a unifying element connecting acting greats like Sean Connery, Al Pacino and Marlin Brando, all of whom he has spent some time around in varying capacities, Ron gives us insight into what they have in common:

“The kind of work that comes out of these guys who create these bodies of work, and I’m talking about lasting bodies of work, bodies of work that last throughout their entire careers where there’s not just moments of greatness, but there’s always greatness. It’s not random and it’s not a fluke and it doesn’t just come from just like smoking cigarettes in between and chit chatting with the girls. It’s, these guys are really putting a lot of time in, they’re really approaching the thing with great demands being made on themselves personally and they take it really seriously. That’s the work, you know, how they behave in their personal lives when the clock’s not ticking and, you know, the camera’s not rolling is a whole different thing and that just changes from person to person, but that’s the one thing that I could say runs through all the guys you mentioned.”

Reflecting on where his life is today, he said this:

“I’m at a point right now where the house is in order. This is what one hopes for. If one, you know, especially somebody who, you know, lost his dad when he was 49 and his brother when he was 38 realizes, you know, I gotta live every minute like it’s my last because it just might be. I’ve seen it happen. You don’t get a chance to choose what your last minutes gonna be. So I would say that if it all ended right now, it be just fantastic, just fine.”

You can find more information and purchase a copy of Ron Perlman’s Easy Street (The Hard Way): A Memoir here.