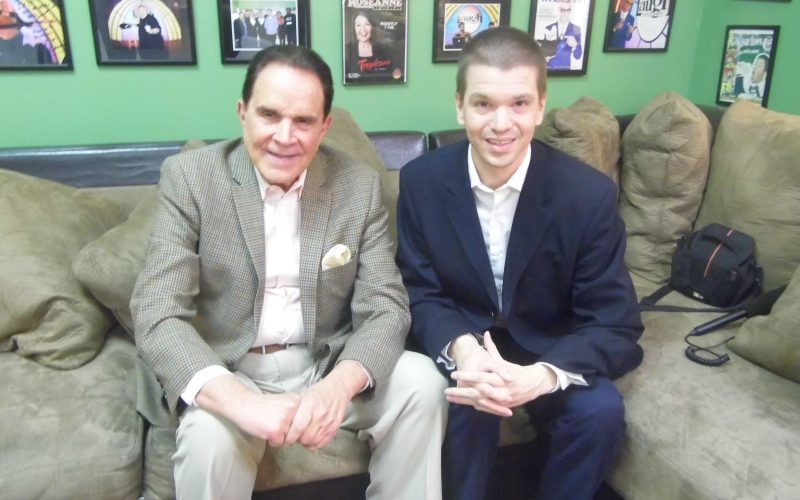 Last Sunday evening, a day before his 80th birthday, we spoke with impersonator, comedian and actor Rich Little, for a 20 plus minute CYInterview. This took place prior to a birthday celebration for the show business legend, with his family and friends, at the Laugh Factory where he currently performs his act. The Laugh Factory is located at the Tropicana Hotel and Casino in Las Vegas. See our photo with Rich above.

We originally spoke with Mr. Little back in 2017 [see here]. This time, our conversation centered on more highlights from his career, including some of his Las Vegas memories, stories of Presidents Richard Nixon, Ronald Reagan, First Lady Nancy Reagan, Jimmy Stewart, Frank Sinatra, Dean Martin and Johnny Carson, among others. There were impressions as well, including Rich doing the late, great Ernest Borgnine who was a CYInterview guest, four years before his passing [see here].

You can see Rich Little at the Tropicana Hotel and Casino weekly Sunday through Wednesday in Las Vegas. The Show begins at 7:00 PM.

Here are a few highlights from our latest CYInterview with him:

On what it means to turn 80 years old, Rich Little told us this:

Alluding to the changes that take place with age, “As you get older, you want the light to be darker, you know. I’ll eventually hope to go on stage with no lighting at all. … It just means that I’m still alive and I’m still working and it’s just a number.”

On what he likes about performing today, the show business legend revealed:

“I like the immediate reaction from the audience that you get and I’ve always liked that.”

On the idea of doing a special for Netflix:

With his history of impersonating various Presidents including the recently deceased George H.W. Bush, Rich Little issued this statement today December 2nd on his passing:

“I am greatly saddened to hear about the death of President George H. W Bush. President Reagan introduced me to then Vice President Bush in 1981. When I did my impersonation of him he said “Stick with Nixon.” He then did an impression of Gary Hart for me. It wasnt bad. Throughout the years, I was a frequent guest at the White House. I was impressed by his ability to maintain his composure even in the most stressful situations. I also admired his kindness and sense of humor. He was a great man who will be sorely missed.”

You can purchase a copy of Rich Little’s Book Little by Little: People I’ve Known and Been Clicking here

2 Replies to “The Great Rich Little, Comedian/Actor/Impersonator Extraordinaire, Celebrates 80th B-day Prior to Set at Laugh Factory at the Tropicana Hotel and Casino in Las Vegas; CYInterview there for Festivities/Convo”