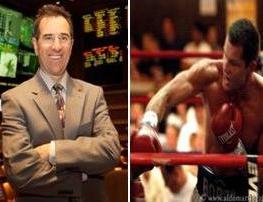 This Saturday night in Las Vegas will be the most anticipated boxing match of this century. When Floyd Mayweather Jr. and Manny Pacquiao get into the ring at the MGM Grand, it will be a fight fans have waited years for. Many thought the match would never happen, including the late, great boxing historian and past CYInterview guest Bert Sugar [see here].

CYInterview brings in its experts to breakdown all the angles. We are joined by Wynn Las Vegas sportsbook manager John Avello who provides us analysis on all the gambling action for this bout. Additionally, we are joined by former boxer and current trainer Bobby Rooney to provide analysis on what he thinks will go down in the squared circle on Saturday night.

You can read the highlights and listen to both CYInterview conversations at the link below:

Listen to the John Avello and Bobby Rooney CYInterviews:

When it comes to the money being bet on the fight at the Wynn sportsbook in Las Vegas, Mr. Avello says the money is coming in heavy on both fighters:

“The money’s going on both fighters and big money at that. Six figure bets common, some on Mayweather earlier, some today on Pacquiao. So the action’s been brisk. … This will be the biggest betting fight of all time and, you know, I’m not even gonna say it could be, I’m just saying it is gonna be. You know, the action we’ve seen early on the fight, putting it up a couple months ago has been just outstanding. You usually don’t see that type of action early.”

In Las Vegas, you currently have to bet $2 to win $1 if you are going to bet on Floyd Mayweather to win. If you wager on the slight underdog Manny Pacquiao, you would win $1.70 on every $1 bet if he wins the fight. Discussing where he thinks the line will end up, John said this:

“I could see it [the line] going either way. I don’t know how to guess on this one. You know, if there’s gonna be Pacquiao support late, the line may even drop further and if we get big bets on Mayweather and the Pacquiao bets can’t make up for those big bets, then the line will go higher.”

The excitement in Las Vegas has been building all week, with tickets to the fight going for easily four figures to up to six figures. Telling us what the week has been like, the Wynn Las Vegas oddsmaker says he has never seen anything like it for a boxing match in his 30 plus year career:

“I just expect the crowd to build and build and the media’s here. You know, I’ve never seen so much media covering a fight before as I have for this one and so the hype is living up to expectations. And I mean, it’s so thick, you could cut it with a knife, let’s put it that way. That’s what we’re seeing and it’s just a wonderful atmosphere. You’ve never been to Vegas before for a fight weekend, this might top them all.”

Will the veteran Las Vegas sportsbook manager watch the fight this weekend?

“I normally don’t watch the fight. But this one I may watch because I’m even hyped into it. So, this one, I’m not going to the fight; I’m gonna work, but I may pickup the fight, you know, and leave work after the fight starts and watch it. But then again, I don’t know. I get tied up into so many different things. Sometimes I get sidetracked and miss the whole event.”

As far as whom former boxer/current trainer Bobby Rooney thinks will win on Saturday night, this is what he told us:

“This is a fight that I’ve played with in my mind. I’ve come up with so many different scenarios with this fight and it always leads to Floyd winning a decision. I’m not ruling out anything else, but overall, I see it going to a decision for Mayweather. I’ve played with the idea of Pacquiao stopping him, which I think is a possibility. Floyd as we know has been hurt in the ring, not much, but he was rocked by Shane Mosley bad early in their fight and Shane wasn’t able to put him away. I think if Manny hurts him like that, his speed and the conditioning and the killer instinct that Pacquiao has, I think he may be able to put him away.”

On whether or not Manny Pacquiao’s punch volume can be as good as past fights for this matchup with Mayweather, the boxing trainer said this:

“I think it will. I think maybe to a higher degree actually. I think he’s taken this fight personal. Floyd’s said some things via social media that I think have made it personal for Manny. I think Freddie [Roach] pointed out some things that Mayweather has said, some distasteful things that he’s said about Manny and I think Manny, you know, being the gentleman he is doesn’t talk about it, but I really think that deep down inside he’s gonna remember those things, those thoughts are gonna be in his mind and he’s just gonna be a machine.”

Discussing whether Floyd’s defense will be top notch like we have seen in past fights, Bobby shared this:

“Mayweather, I think he’s probably one of the best defensive fighters of all time. I mean, he doesn’t get hit with big punches. With that being said, he’s gonna be in there with somebody for the first time I think that is probably faster than he is and then you throw the southpaw into the mix and punches are gonna becoming from angles that he’s not use to; it’s speed that he’s not use to, the footwork of Manny is, I mean unprecedented. If he has Floyd on the ropes, just the angles that he’s coming from and the unorthodox punches that he throws with the speed that he throws them with, he can, he has the ability to land big shots.”

I asked Mr. Rooney how he would stack up the anticipation for this fight with past, highly touted, boxing matches. He offered this:

“In my time, everybody likes to talk about Frazier and Ali. I was alive at that time, but it was before my time. I don’t remember it obviously. In my time, this fight is the biggest since and maybe even bigger, but Tyson and Holyfield, the first fight to me was two titans going at it with all the buzz and a similar situation. And when I say that, Tyson was a villain in a lot of people’s mind. Not in mine, but a lot of people looked at Tyson as the villain because of some of his stuff outside the ring and same thing with Mayweather. I think a lot of people tune into Mayweather to see him get beat, to finally seem him quote unquote, shut up and that’s where I draw the comparison between those two fights.”

You can find Bobby Rooney and his client Beetlejuice on Twitter clicking here and here.