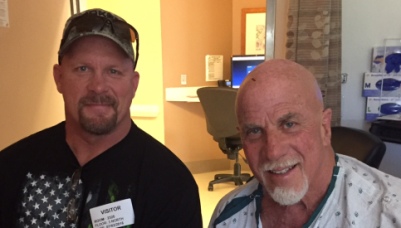 He was part of the golden age of bodybuilding. He was one Arnold Schwarzenegger’s training partners during that era. He’s been an actor, a pro wrestler and a pro wrestling teacher. He shares much of his knowledge on his popular YouTube show Ric’s Corner. Additionally, he is currently a contributor to the Huffington Post. Of course, we are talking about none other than past CYInterview guest Ric Drasin.

Recently, the former Mr. Venice Beach was in and out of the hospital. Ric Drasin tells us what happened and gives an in-depth recounting of his recent health challenge, from beginning to end. While in the hospital, the host of Ric’s Corner was reached out to by some well-known individuals, including former WWE World Champion and movie star Steve Austin, who checked in on him. See a picture of the two of them above.

You can hear a full account of the events by listening to the entire CYInterview or read the highlights below:

Discussing his recent health challenge, Ric Drasin told us what he was dealing with:

“I had pneumonia and congestive heart failure, which it’s not really a heart attack, but your heart is drowning in fluid. So when your heart drowns from the fluid, it can’t pump. It’s struggling to pump. It can’t pump and the fluid is taking over and then eventually it just stops pumping. And then your body fills up with fluid and then you’re gone. So you gotta get that fluid out of there.”

On Steve Austin and others reaching out to show their support while he was in the hospital, he shared this:

“He [Steve Austin] had called me. He said, ‘A friend of mine said you were in the hospital sick.’ I said, ‘Yeah. You want to come over.’ He said, ‘I’ll be over there tomorrow.’ Sure enough right on time he came, sat with me for quite a while. Then he’s checked on me three times since. He’s just a good guy, just a really good guy. Made me feel really nice he showed up. [Lou] Ferrigno must’ve called me, oh my God, at least five times, very worried about me. Schwarzenegger said he was coming out, but he never showed up. Said he was gonna come, but he never showed up.”