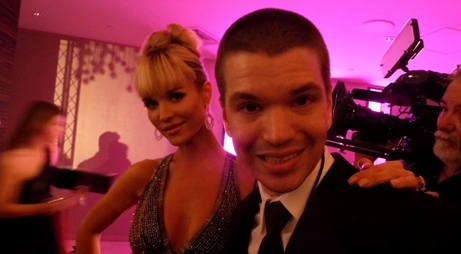 Over the last few days we have shared with you our coverage of The Blacks’ Annual Gala. If you’ve missed the main coverage of the event, you can find it along with the photos [see here]. Additionally, we have already posted our first CYInterviews at the event, with attorney Roy Black and musician Taylor Hicks [see here].

Videoing of the annual charity soiree has taken place for the last couple of years for The Real Housewives of Miami and a crew was on hand again shooting for a third consecutive year.

We spoke with a variety of The Real Housewives of Miami cast members. We had the opportunity to chat with model Joanna Krupa and fashion designer Lisa Pliner, both of whom we had never met previously. They are both great. See my photo with Joanna above.

We caught up wit four individuals from the show, who we have met before including Joanna’s fiancé Romain Zago. Romain is the owner of the popular South Beach club Mynt. Back in 2010 we spent a great evening at his club with CYInterview friend, Grammy winner Mya – who gave a magnificent performance, by the way.

Additionally, we had conversations with Lisa Hochstein and her husband, plastic surgeon Dr. Lenny Hochstein. Finally, we spoke with now former Real Housewives of Miami costar Dr. Karent Sierra who is making a name for herself on the TV show The Doctors.

All of the folks from The Real Housewives of Miami shared some interesting insights. It seems the current cast members are expecting more drama for season three of the program.

You can read the highlights and hear those red carpet conversations from The Blacks’ Annual Gala below:

For model Joanna Krupa, her goal is to one day have the charitable impact that her Real Housewives of Miami colleague Lea Black does. Ms. Krupa has been a long time animal rights activist. Talking about a new charity she has formed, the former Dancing with the Stars contestant told us this:

“I love the animals. I’m actually starting my own 501c which is gonna be Angels for Animal Rescue. So I’m very excited. So now any time I do any charity work and fundraisers it will be for my own cause and then at least I’ll know which animal I’m saving and I’ll be able to post pictures and everything will be recorded or reported so everybody knows where their money’s going to.”

Joanna tells us that she and fiancé Romain Zago are planning their wedding. She also says to expect more drama on the upcoming season of The Real Housewives:

“A lot of drama that’s for sure, you can never stay away from the drama having so many women in one room. But Romain and I are planning our wedding finally. I mean, we still have a couple months. So we’ll see if anymore surprises happen this season. If not, if we survive, we’ll definitely have the wedding.”

Joanna’s fiancé Romain Zago is the owner of Mynt Lounge which is one of South Beach’s top hot spots. The club owner talks about his thoughts on all the drama on the Bravo program:

“It’s a big show filled with a lot of drama. It’s tough. You know it’s tough because woman behavior is sometime a little bit edgy and as guys we usually stand in the background, but we have to get use to it. It’s hard for me to get use to the drama and to, it’s very real. It’s just so real. Everything you see is real. There’s nothing fake. There’s nothing planned and sometimes with a couple of drinks you never know what to expect, but it’s still fun.”

Romain tells us you can expect to see him more on season three of The Real Housewives:

“Yes. Every day filming, much more. Like 10 times more than last year.”

For Lisa Hochstein, The Blacks’ Annual Gala was a special, among other reasons, because she is a big fan of Flo Rida. The rapper provided the evening’s main performance:

“I love Flo Rida. He’s my favorite. I love his music. I’m a huge fan. I love the house version and I love the original version of so many of his songs. He’s number one right now.”

Lisa took the same position as Joanna, that viewers should expect more drama on season three of RHOM:

“You can expect a lot more drama because now all the ladies know each other and that’s always dangerous.”

Lisa’s husband Dr. Lenny Hochstein told us you probably will not be seeing him as much as Romain Zago on the upcoming season. But the plastic surgeon told us he makes time to be on the show when possible:

“The problem is I have my own job. So I don’t have as much time to donate to the show as my wife does. But I’m sure that any opportunity, I’m certainly happy to be there.”

When we were with his Lisa at the recent Miami Heels event [see here], Lenny was out in Las Vegas. He tells us about the trip:

“Las Vegas was great. I got to visit with my good friend. It was his birthday. So it was very nice to be able to come out and celebrate with him.”

Though she is no longer part of the Real Housewives cast, Dr. Karent Sierra is breaking new ground participating on the TV show The Doctors. She tells us about that experience:

“I’ve been going back and forth to L.A. guest hosting for the show and it’s been fun. It’s been, it’s a different ride. You know it’s landing into L.A., filming at Paramount Studios which has always been a dream of mine and dealing with a wonderful, wonderful group.”

On whether she is aiming for a career trajectory in television like Dr. Sonjay Gupta and Dr. Oz, Karent tells us she’s following her own path:

“You know what? I aim at being Dr. Karent Sierra. No one else.”

Finally, we spoke with designer and philanthropist Lisa Pliner, who guest starred on last season’s iteration of the Bravo program. Though she now lives in Los Angeles, she has been supporting Lea’s charities for over 20 years and would not miss the tradition that is The Blacks’ Annual Gala:

“I have supported Lea and Roy since day one for like all their charities and me and Lea have actually all been friends for about 20 years. So to be able to come back in town and be part of something that’s just a tradition just makes it all worthwhile.”

In the future, when she is in Miami, Lisa told us she is looking forward to sitting down for her in-depth CYInterview:

“I would love that. Thank you.”

You can find more information about Dr. Karent Sierra here.

You can find more information about Dr. Lenny Hochstein here.