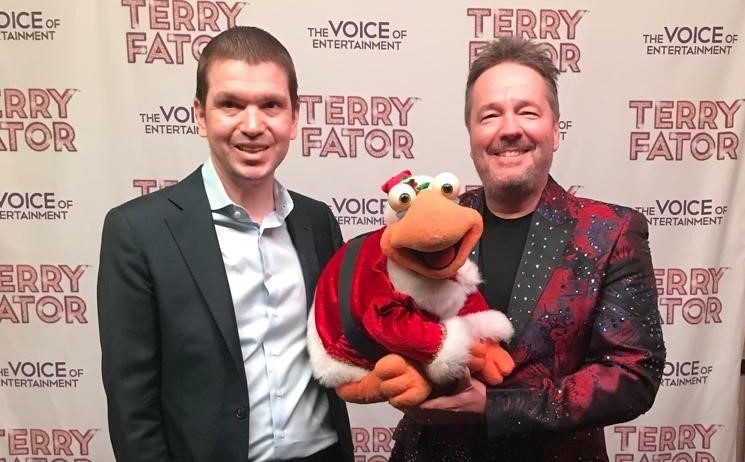 Last night, CYInterview was on hand for ventriloquist, singer, impressionist, comedian and past CYInterview guest Terry Fator’s 2022 iteration of his holiday show, A Very Terry Christmas, at the Liberty Loft at New York-New York Hotel and Casino on the Las Vegas Strip.

During last night’s performance, Terry delighted the audience with his renditions of famous holiday songs, including The Christmas Song by Nat King Cole and Blue Christmas by Elvis Presley. While singing each song, Mr. Fator performs it in the voice of the person who made the song famous.

Throughout the show, the America’s Got Talent winner wowed the crowd with impressions of Bing Crosby, David Bowie and even Cher. A humorous, production for adults, Terry Fator’s holiday show will put you in a cheerful mood. He sings songs for Christmas, Hannukah and even some made up holidays his cast of puppets tell him about.

After the show, we met Terry backstage with one of his most famous puppets, Winston the Impersonating Turtle. You can see our photograph with Terry, above.

With a year-round residency in the Entertainment Capital of the World, Mr. Fator changes his show to a holiday theme for a limited time every year. This year, visitors can see A Very Terry Christmas from November 25th to December 27th. You can find more information about the show by clicking here.

You can see our past CYInterview with Terry Fator by clicking here.

You can find Terry Fator on Facebook by clicking here.

You can find him on Twitter by clicking here.

You can find him on Instagram by clicking here.