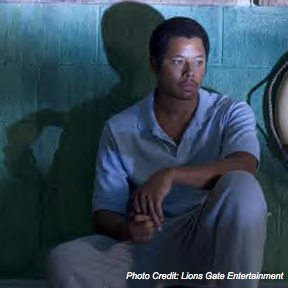 It took two decades for Terrence Howard to get in that main spotlight, but he has arrived after his Oscar nomination for Best Actor in Hustle & Flow. His latest role is a real life swim coach Jim Ellis who helped a group of black male high school swimmers become competitive and compete for a state title in the movie Pride. The actor opens up about a lot of topics regarding the movie, his mother’s battle with cancer and how his family affects him, and his love for his estranged wife Lori through everything.

Listen to the Terrence Howard CYInterview:

Chris Yandek: After the Oscar Nomination and being in the best movie of 2005 Crash, what is it like to be an overnight sensation and what did it really take to get to this point as a lead actor?

Terrence Howard: “It just more so takes perseverance. The fact that it took 20 years to be a overnight success means that life is really filled with a whole lot of surprises because right when you think alright I need to go and find another gig because that was the place I was at and you pour out that last bit of your energy and that’s what they have been waiting for. That’s what they have been waiting for, for it to be special. It means that the ride has been worth it.”

CY: Does Pride shows us that it doesn’t matter if it’s 1974 or 2007, that you can accomplish even being a minority to something no matter your ethnic background and that you can overcome the adversity and possible threats that come with it?

TH: “Yeah. Well, the reality is there are no minorities. All there are is human beings. We’re the ones that separate ourselves and say you know there is more of us than there are of them. When there is just as many of us as them as long as they are human beings. Do we still have some ways to go? Yes. We are always going to have some type of challenges. As long as the energy is put out there properly, as long as the intentions are right, and the fact that you are as accurate as possible, you will make reasonably beneficial decisions and we just keep working at that. We keep plugging away. It’s really truly being as motivational and as encouraging as you possibly can. There is so much discouragement out there. It’s incredible.”

CY: Do these male teenage swimmers in Pride share a lot of the same experiences you had to deal with growing up regarding the tough community you lived in and the racism you endured as a child?

TH: “Yeah, but I don’t think they had it as bad as I had it or as perhaps you had it or anybody that was growing up during the time of change. You are talking when the structure of the earth split a bit. When the social order really made its huge shift from one tactic, one big huge plate until another one. There was a lot of immediate aftershock. There was a lot of earthquakes, emotional earthquakes, racial earthquakes at the time. Now things have settled a bit. Now things have settled and people are not in a strenuous situation as they used to be.”

CY: What did you learn from the real life swimming coach Jim Ellis to prepare for this role and are we lacking that kind of motivator and role model in today’s society like him?

TH: “No. I think as a society they are there. The only thing that Jim did which is a credit to himself, he gave of his time. We all have a similar gift. We all have something in which we are a little special at that we may be able to do a little better than anybody else. Now Jim’s thing is swimming. He’s a really good gentle persuasive teacher, but he also had a whole lot of other responsibilities, his wife, his son, his teaching responsibilities at his school, but he gave of his time. Now I think of the rest of those role models need to give of their time. I am trying to do the very best I can with even giving more of my own. That’s all we need, just a little time, share it.”

CY: How important is it for you to play different kinds of roles like Jim Ellis in Pride in for example and was this role just like others the luck of the draw?

TH: “This was a role that my team put together for me. I started speaking to Sunu about a year before, that’s the director of this film and I was interested. My mind is always on these very harsh dirt ridden characters because I have the most information about them. Those are the ones I am most comfortable playing. This one really was important for me to expand outside of my comfort level and as a result I learned a lot.”

TH: “Well, I learned to swim when I was a kid. My dad threw me in the swimming pool and said get it or drown and if I drowned I was gonna get whooped. I was gonna make sure that I was gonna swim. He really spent a lot of time teaching us how to do it. It was a great inspirator in our lives. I thought I could swim well, but after spending time with Jim, the two months I spent with Jim Ellis, I realized there is technique to it. You can get across the swimming pool like a car can get across the freeway and burn up all the gas it has in it or one can be very fuel efficient and just burn up a tenth of a tank of gas. That’s what I was doing. I was getting across the swimming pool, but by the time I got to the other side I had burnt up all my energy. I wasn’t using it efficiently. That is what Jim teaches, efficiency in the water.”

CY: I read reports your mom is battling cancer and I want to tell you she is in my prayers and I definitely ask my readers and listeners of the interview to do the same. How hard has it been on you and what does your mom and family mean to you?

TH: “What everyone else’s family means to them. Without her I am not here so when she is in pain I am in pain because my son is sick right now and has a real bad cold. I mean my heart is breaking that I am not in Philadelphia there to help him, but with every cough with every sneeze I feel his pain somehow, the laws of entanglement, so everything my mom is going through we’re all going through. The fortunate and unfortunate side of it is my mom isn’t alone in that because there is a lot of families going through the exact same thing and we just try to give each other as much encouragement as possible.”

CY: Finally, you have been around many of the best all around women in your life, but you have stated your love is your wife and you are trying to reconcile. Do you believe in that one person you care about above the rest that you would rather be with than anyone else?

TH: “Yeah. Well there is only person you thoroughly can give you heart to. Generally that high school love, that first love, that’s when you are free. That’s who Lori is to me despite what other problems we had. I mean life is filled with problems. I am gonna have trouble with any woman that I am with because I am a difficult man, but I might as well have trouble with somebody that I really love.”

Terrence Howard stars with Bernie Mac in the movie Pride opening in theaters nationwide on March 23, 2007. You can find more information about the film at www.pridemovie.com.