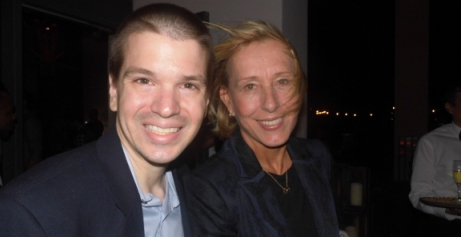 Martina Navratilova is one of the greatest tennis players in history. With 18 singles, 31 doubles and 10 mixed doubles major championships, her grand slam championship total of 59 makes her the winningest major champion in American history, male or female, and second overall worldwide. Major championships consist of tennis’s four major tournaments which are the Australian Open, French Open, Wimbledon and the US Open.

Few have contributed as much to the sport of tennis as Ms. Navratilova. Last week, during the IWC Schaffhausen watch event on South Beach, we had a chance to catch up with the tennis legend about what is going on in her life and how often she is now getting out onto the court.

Speaking about what is new in her life, Martina tells us this:

“Well, a lot and nothing at the same time. I’m still here, have a great family, getting married and still doing tennis commentary and doing a lot of speeches around the world and, you know, I’m like a dolphin. Dolphins spend 75 percent of their time playing and 25 percent of the time looking for food. So that’s about a good ratio for me.”

On how much time she still gets to play tennis every week, the winner of 59 major tournaments revealed:

“Not as much as I would like, but often enough. I still play the legends at all the grand slams. So I get to play at least four times a year in those events and maybe a couple of other exhibitions and so I keep current, I keep hitting and my 13 year old is playing tennis so I get to hit with her as well.”

Ms. Navratilova, a Miami resident, told us she has a few IWC watches:

“I live in Miami, so that’s what brings me here and IWC, we’ve had a long connection through the Laureus Foundation and Laureus Academy. They sponsor the academy, so I am here on behalf of the academy and I love watches. So, I think I have three or four IWC watches.”

You can check out Martina Navratilova’s official website here.