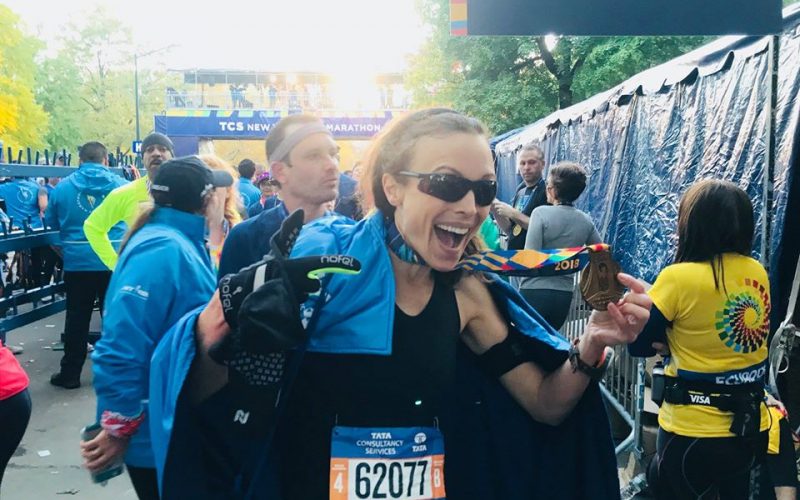 Back in March, we welcomed actress, filmmaker, producer and running enthusiast Liz Vassey to talk about her documentary The Human Race [see here]. You can currently watch her outstanding documentary on Amazon Prime Video, as well as a variety of other streaming platforms. In challenging times like these, Ms. Vassey’s film provides a powerful motivational story about people taking control of their lives through running. In short, the film is an uplifting must see.

Ms. Vassey has had a long and varied career as an actress. She began acting at nine years old, moved to New York City to work on a soap opera at 16 and has had recurring roles and starred in hit TV series like Two and a Half Men – playing opposite Charlie Sheen – and CSI Las Vegas. Besides being a successful actress, Liz is also a singer. In front of the camera her star has shined bright. Now, however, she is displaying tremendous ability behind the camera as well, as a director/producer.

With the world in the grips of the coronavirus pandemic, working out in commercial gyms is out of the question for many people. However, running outdoors – away from others – could be a great way to get some much needed physical activity, in a relatively safe manner. We spoke with Liz Vassey about this, based on her experience as a runner, as well as her experience as a documentarian who has focused on the subject. She shared this with us:

“I think it’s a great alternative right now. In fact, a lot of people have been writing me because they’ve seen the documentary and they said, ‘I’ve now taken up running as my form of exercise during this time because I can go out, I can be alone, I can be socially distanced.’ And it seems to be kind of a lifesaver because anybody that’s use to physical activity wants to keep that up. And anybody that’s not use to physical activity, it’s incredibly cathartic during this frustrating time. So, I highly recommend it.”

With the positive reaction she has received from viewers of The Human Race, the filmmaker tells us she has considered making a sequel:

“There’s definitely a chance because a lot of runners wanted to be in the first one and unfortunately, we just ran out of time. And also people that contacted me afterwards asking if maybe there’s a Human Race 2? Because they’d like to be in it. People want to be seen and they should be.”

Featured columnist Jay Bildstein joins us for this CYInterview, in which he and Liz delve into the power of exercise to help uplift us, particularly in these challenging times.

You can listen to this compelling CYInterview with Liz Vassey, in its entirety below:

*Editor’s Note: CYInterview, its personnel and guests do not provide medical advice. Medical advice should specifically take into consideration the unique health circumstances of a given individual. Before embarking upon an exercise routine, please consult your physician and get clearance to begin. During the current coronavirus pandemic, a telemedicine appointment might make sense for those who are concerned about being in a physician’s office. Your health is your responsibility.