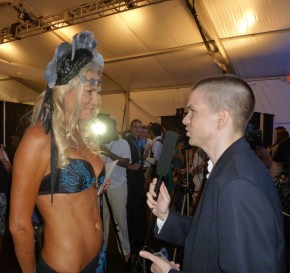 Lisa Burke is the fashion designer behind the Miami Beach fashion event CYInterview attended last week, where I met singing star Christina Milian [see here]. Lisa’s a native of Australia and is the driving force behind the Lisa Blue swimsuit line. Besides being a clothing entrepreneur, Ms. Burke is out on the catwalk along with the other models in her shows, strutting her stuff. I had the chance to CYInterview Lisa Burke after her fashion show in Miami Beach. You can read the highlights and listen to the on the scene conversation below:

In addition to her women’s swimwear creations, Lisa donates 25 percent of her net profit to assist in protecting whales and dolphins. She talks about her passion for whales and why she knew she had to do something:

“Several years ago I went to Tonga to swim with humpback whales and during that time I came face to face, like this close with a baby and the mother whale. We’re talking like 20 ton mum and the baby’s like the size of a big bed came right up to my face and in that moment I made a promise to the whales that I would do what I could to protect them and hence when I created Lisa Blue. I made a decision to donate a quarter of the profits to helping the whales and dolphins.”

In Lisa’s fashion show, kicking off Mercedes-Benz Fashion Week Swim in Miami, there was a lot of white, gold and blue used in the swimsuits. She says those are the in colors that are in for this year’s swimsuit season.

“Definitely a strong thing to that, a trend to that, but I also think black is every year. You can do black and I love the mesh black dragon one. That’s one of my favorites.”

Besides creating the designs for the women who wear her suits on the runway, Ms. Burke is a model in her own right. She explains why she gets out there with all of her girls and shows off her swimsuits:

3 Replies to “Sultry Lisa Burke of Lisa Blue Talks Swimwear, Saving the Dolphins and Gals of All Shapes and Sizes Taking the Plunge at the Mercedes Benz Fashion Week Swim in Miami – Her Heart’s as Golden as Her Hair”