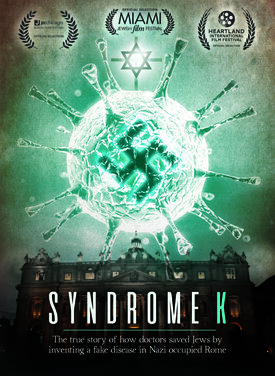 There are many stories of courage from World War II. Here is one of them. A group of doctors in Rome invented a fake disease called Syndrome K. It saved many Jewish people in Rome from being taken away by the Nazis to the Auschwitz concentration camp where they would be gassed to death. This was the fate of many other Jewish people. Their crime, being Jewish. That is to say, they committed no crimes at all.

On August 16th, a documentary film by Stephen Edwards, titled Syndrome K, will be available on a variety of platforms. It focuses on the story of these heroic doctors who did the right thing against evil. The project is narrated by the late actor Ray Liotta.

Mr. Edwards joined us on CYInterview to talk about his documentary. The film reminds us that a small group of people can make a difference in the world.

Speaking about Syndrome K, Stephen Edwards believes his film can inspire others to do great things in challenging times:

“When you have such a great example presented in front of you, by just regular old people, that showed that bravery, showed that, you know, it’s so Italian. … These doctors just sort of did it because it was the right thing to do. You know, I love the quote from Dr. Ossicini that says, ‘Bravery aways wins.’”

Ray Liotta became the narrator of the film, owing to a friendship between the Goodfellas star’s daughter and Mr. Edward’s daughter, who went to school together.

On Ray Liotta, narrating the film, as well his untimely passing, Stephen Edwards had this to say:

And we couldn’t believe that in 20 minutes, Ray’s showing up in my studio to do my little film. It was really such a joy to work with him. He was, you know, hilarious, super professional, profane, just a blast to be around, full of life, energy. You know, he’s the heart-beat of our film. He’s the storyteller of our film. He’s the tour guide. And we were so sorry to lose him. It was just a really bad day for all of us.”

The filmmaker says a featured film based on the Syndrome K documentary is in the works:

“We are very actively developing a narrative version of this. … We have a completed script. We’ve got a major talent agency helping us. So, we fully expect to make a movie based on this doc.”

Featured columnist Jay Bildstein joins us for this CYInterview. You can listen to it in its entirety below:

Listen to the entire Stephen Edwards CYInterview on YouTube:

You can learn more about Syndrome K by clicking here.