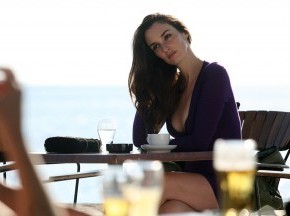 In 2004, Spanish actress Paz Vega came to the big screen, playing opposite Adam Sandler, in Spanglish. It was her first Hollywood movie. Ms. Vega has gone on to have numerous roles in a diversity of films.

This Friday, April 1st, Paz will be featured in the movie Cat Run, out in select theaters. She plays a prostitute who is the mother of a young child. Her character struggles to make it through life each and every day. Vega has never performed in a role like this one. The film includes blood, murder and people dealing with sexual issues, yet there is a comedic component to the film making it a dark comedy.

“That’s why I say yes to John Stockwell [Cat Run Director] because this is the first that I do this kind of movie with a lot of violent, bloody, a lot of sexual issues and stuff. I think it’s different because with the humor, you see this violence…This one is kind of different because it’s over the top, so it’s kind of like a comic in a way. You can enjoy even if you don’t like violence.”

Paz is the mother of three children. The actress says she would love to have more kids. Ms. Vega says eating right during pregnancy helped her get back to her original size and that’s the secret of why she looks so great today.

“I think it’s the best thing in the life. It’s really changed my life when I have my first kid. Now that I have three, I’m really, really happy and I would love to have more. It’s a really amazing experience. Sometimes it’s hard when you are working and you are traveling a lot. Sometimes you cannot be with your kids and it’s hard. But the time when I’m with them, it’s the best in the life and I would love to repeat again and again…When your pregnant, you have to be careful what you eat, but not because you don’t want the weight, just because you have to be careful because you are creating a new life. It’s just that. If you are careful during the pregnancy, after it’s very easy to be back to your own body and it’s just that.”

In 2004, Paz’s role as Flor, in Spanglish, opposite Adam Sandler initiated her Hollywood career. It was a life changing experience for her. Considering she formerly spoke no English, Vega never thought about going to Hollywood and being in English language movies.

“After that, my life changed because I started to work here. I never thought before to come here to Hollywood. I never thought that before because I didn’t speak any English. So after that movie, I don’t know, suddenly it was like a new opportunity to do something else and now I’m here. I’m living in L.A. and my life changed a lot and I’m very happy. It all happened for this for Spanglish.”

In 2008, she made the Maxim top 100 hot list. Paz says making the list didn’t mean anything to her and it’s not something she thinks about because she says there are beautiful women everywhere. However, she does acknowledge it’s a good compliment.

“It doesn’t mean anything. That kind of, least, for me it’s ridiculous. There is beautiful women everywhere walking from the street. It doesn’t mean anything…Always, it’s good, it’s a compliment, it’s a good compliment because they say oh, because you’re sexy. Ok. Ok. Good. Great, but no I don’t want to think about it. Actually, I don’t think about it.”

Looking at Paz Vega you might see a resemblance to another Spanish actress. In some ways she looks like Penelope Cruz. Vega says many people mistake her for Cruz and even members of the press confuse the two actresses. They look like they might be sisters. Paz says it’s a great compliment to be mistaken for Ms. Cruz.

Finally, Ms. Vega tells us what her future career and life aspirations are:

“Just to keep working, which is hard in these times. To try to get, to find good scripts with great character…This is my goal in my life and to have time to spend with my kids, which is the most important thing.”