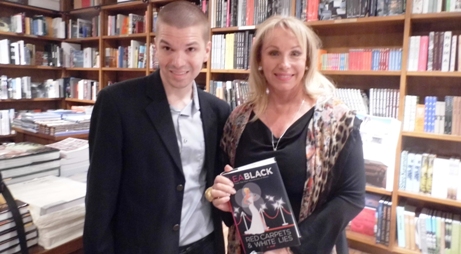 A jam packed crowd came out for the debut of the Social Mayor of Miami, Lea Black’s foray into the literary world. The philanthropist, entrepreneur and Real Housewives of Miami Star spoke to the assembled about her first book, a work of fiction entitled Red Carpets & White Lies: A Novel. The event took place in Coral Gables, at Books & Books.

Lea fielded questions from the attendees including: What inspired her to write the book? Did her being on the Real Housewives of Miami influence its contents in anyway? And, there was one particular question about her favorite high society parties, from one of South Beach’s notable nightlife personalities, Ingrid Casares. Following the evening’s question and answer session, Lea signed copies of her book for friends and fans.

Red Carpets & White Lies: A Novel will be released nationwide on May 5th. The book captures the Miami scene and features intriguing characters, inspired by Lea Black’s personal experiences. This is a must read for Miami residents. For someone who has never been to South Beach, or any other part of the Miami area, Ms. Black’s work provides a compelling view of the city, in all its glory. Lea told the crowd that her publisher has already inked a deal with her to write two more books in the same genre.

One Reply to “Social Mayor of Miami, Real Housewives Star, Philanthropist, Entrepreneur and Now Author Lea Black Wows the Crowd at Books & Books in Coral Gables for the Kickoff of Her Book Tour for Red Carpets & White Lies: A Novel”